What is that one thing that most of us look at while purchasing an electronic device? Yes, you guessed it right. It is the device’s ‘battery life’. And, laptops are no different to this consideration.

According to a new study conducted by the consumer magazine, Which?, it has been found that “the battery life claimed by laptop manufacturers rarely lives up to reality.” While the study showed that almost all laptop manufacturers overemphasize their battery claims, the battery life approximations in some cases were twice more than what was achieved in the magazine company’s lab testing.

Over the past one year, Which? tested more than 67 different laptop models to check the battery life claimed by their manufacturers. The list included some of the world’s most popular laptop makers such as Apple, HP, Asus, Lenovo, Acer, Dell, and Toshiba.

The tests found that in case of Apple MacBooks the claimed battery life by the manufacturer could be met or even exceeded. However, in case of some other manufacturers, their laptops lasted hours less than the claimed time, while some batteries only lasted 50% of their stated durability.

In order to carry out the tests for battery life, Which? used the standard method of actively browsing the web over Wi-Fi until the battery is completely drained by running it at least three times from its full capacity. However, factors such as brightness, or what browsing software was used was not included in the tests conducted. The number of laptops tested were: Acer (8); Apple (3), Asus (8), Dell (10), HP (12), Lenovo (20), Toshiba (6). 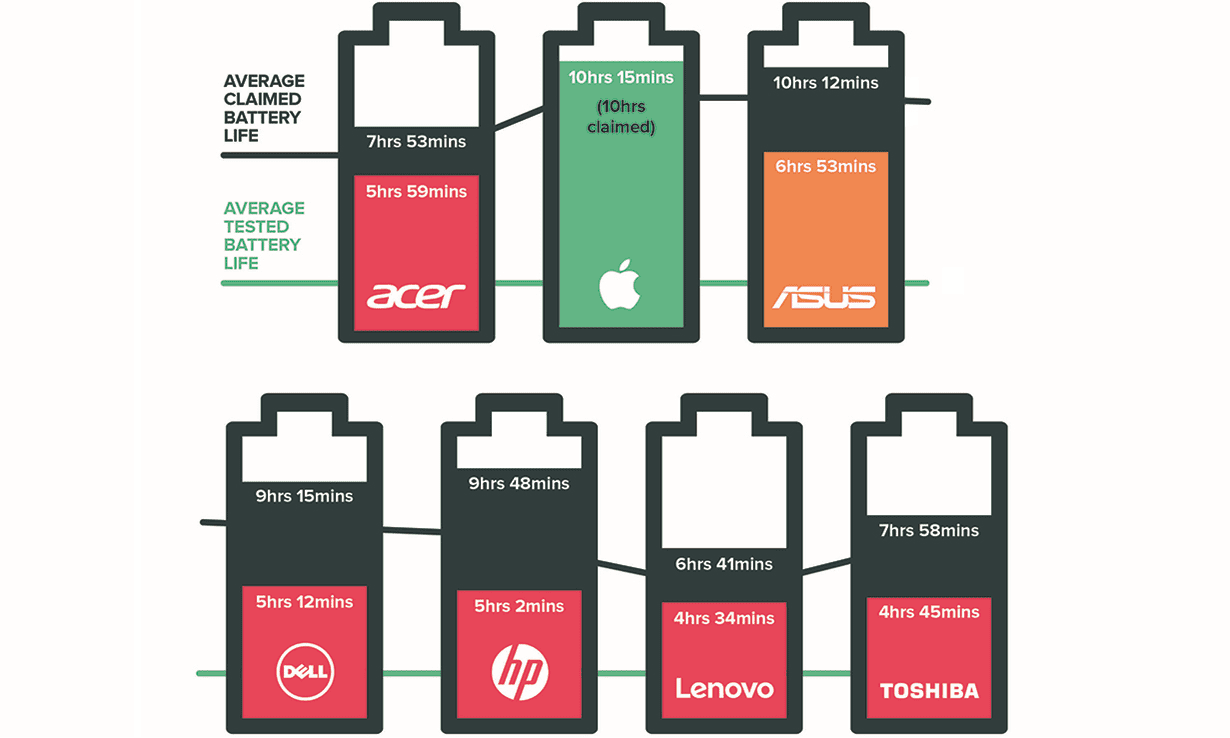 Above you can see the distillation of the magazine’s 67 tests into chart form. As you can see, the only manufacturer to understate battery claims was Apple. In one case, it claimed that its MacBook Pro 13 could achieve 10 hours of usage, while tests suggested it could go for as long as 12 hours.

When Which? magazine contacted laptop manufacturers to ask for an explanation regarding the discrepancy in the claims of battery life and their lab testing, Dell said, “It’s difficult to give a specific battery life expectation that will directly correlate to all customer usage behaviours because every individual uses their PC differently – it’s similar to how different people driving the same car will get different gas mileage depending on how they drive.”

On the other hand, HP said its own battery tests were accurate and run using “real life scripts and runs on real applications like Microsoft office.”