What is GLONASS: The Russian GPS alternative

We all know and use GPS everyday on our smartphones but did you know there exists an alternative to GPS. While GPS was created in 1978, there was soon created an alternative by none other than the Russian government – named as GLONASS. It is an acronym for Globalnaya Navigatsionnaya Sputnikovaya Sistema or Global Navigation Satellite System.

The development of GLONASS was started in 1976 by the then Soviet Union. Today, its a part of the Russian Space Agency, claiming over a third of its annual budget in 2010. The system was primarily used for weather positioning, velocity measuring, and timing till the collapse of the Soviet Union. Paired with the short life span of the satellites used by the system- approximately 3 years – meant that very few believed that the system would be a success.

In 2001 however, the current Russian President made the completion of the project a priority for his government – leading to increasing the funds provided to the project. 6 years later in 2007, he issued a Decree of the President of the Russian Federation, opening GLONASS up for unrestricted public use. The Russian government is said to have spent around $5billion on the project until 2011 and is expected to spend another $10 billion by 2020.

What makes it different from GPS? GPS vs GLONASS

The most obvious difference between the two systems, is the number of satellites. GLONASS has 24 satellites that share 3 unique orbits whereas GPS is said to consist of 32 satellites across 6 orbits. This means that there are more satellites in the same orbit with GLONASS, which could convert to reduced accuracy of the system. The image below compares the satellites and orbits of the two systems. 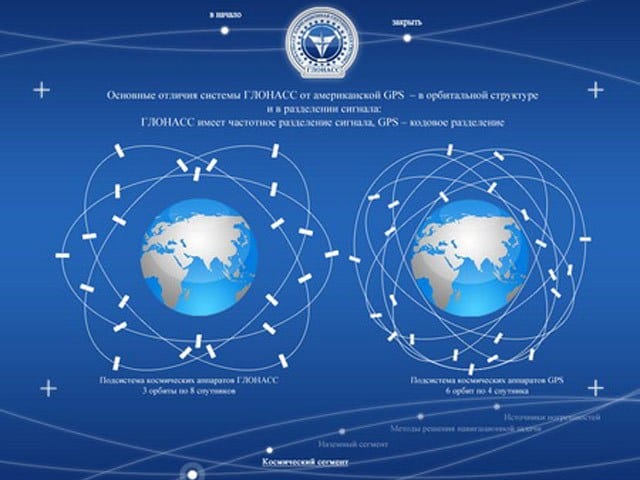 Today’s there isn’t much difference between the accuracy of GPS and GLONASS. This wasn’t the case at the beginning of the century however, with the system falling into disrepair and the satellites nearing the end of the life cycle. This all changed when the Russian Space Agency – Roscosmos -set a target for the system to match upto the standards of GPS by 2011. When 2011 rolled around, the system had reached its target and shown to be accurate in the absolute best environment (no cloud coverage, tall buildings or radio interference), to 2.8 meters. This made it slightly less accurate than GPS. However, its accuracy is not as good in the southern hemisphere since the system was designed to serve Russia.

Also Check out – GPS Spoofing and its Dangers

Many commercial manufactures including Apple, Sony and HTC use GLONASS chips in their products however, it is nowhere close to being as widely used as GPS. Car navigator as Glospace SGK-70 was the first commercial device to use GLONASS and the Russian government has been trying hard to promote the project commercially.

Though it does not provide much of an advantage over GPS, it is used together with GPS to increase accuracy. Many manufactures include chips of both GPS and GLONASS in their products. Therefore if you find yourself in a clouded area or between lots of tall buildings, your device will probably use GLONASS alongside GPS to point out your location since this allows a combined 55 satellites to pin point your location.