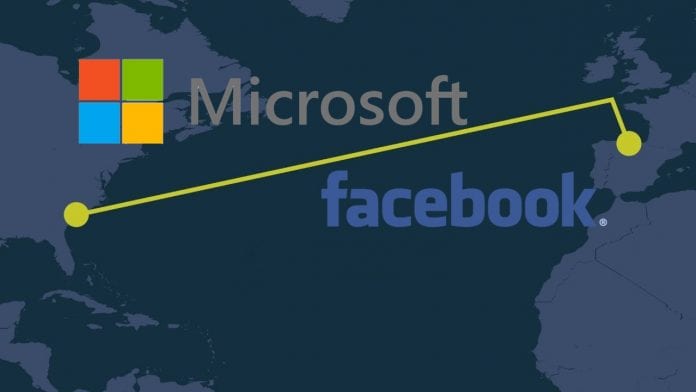 Microsoft and Facebook, together with Spanish telecom infrastructure firm Telxius, gathered at an event in Williamsburg, Va on September 22 to announce the completion of the 4,000-mile long subsea cable “Marea” that connects Spain to the east coast of the U.S. Marea, which means “tide” in Spanish, is a joint project between Microsoft, Facebook and Telxius.

Suresh Kumar, Microsoft’s Corporate Vice-President for Cloud Infrastructure and Operations in a blog post, said the subsea cable was “the most technologically advanced subsea cable to cross the Atlantic Ocean”.

“In a time when global economies are deepening their reliance on cloud technologies, and both private and public sectors are embracing the opportunities for growth and improvement through digital transformation, we’re energized by the impact the Marea subsea cable will have on the advancement of cloud computing and digital services,” said Kumar.

“And we look forward to furthering our respective investments in building high-tech infrastructure to better connect our world, foster economic growth and advance technological capabilities.”

The fiber-optic cable that runs for more than 6600 kms, lies more than 17,000 feet below the Atlantic, and weighs about 4.65 million kgs (same as the weight of 34 blue whales), is also the first cable to connect Virginia and Spain, landing in Virginia Beach, Va and Bilbao, Spain.

It transmits data at speeds of 160 terabits per second (Tbps), which is 16 million times faster than the average U.S. home internet connection. This speed makes Marea capable of streaming 71 million HD videos simultaneously. More importantly, the communication infrastructure will allow Microsoft and Facebook to transfer large bits of information between the many computer data centers more efficiently. The subsea cable is expected to be operational by early 2018.

Marea’s route is south of existing transatlantic cable systems, most of which are located in New York and New Jersey.

“Being physically separate from the other cables helps ensure more resilient and reliable connections for customers in the United States, Europe and beyond,” Kumar wrote.

Kumar also said the cable’s new “open” design would allow it to grow with technology, as the need to meet the demand for internet and cloud service has increased around the world.

“And make no mistake, the demand is growing. Just think of the many high-bandwidth applications and content you use today such as Skype and Facebook Live, and the volume of streaming videos, movies and music consumed daily,” he said.

“This ability to interoperate with many different kinds of networking equipment brings significant benefits including lower costs and easier equipment upgrades, leading to faster growth in bandwidth rates.”

The project was first announced last May, although work didn’t start until around August 2016, with a planned completion date of October 2017. However, right from designing to construction, Marea was completed in less than two years, which is almost three times faster than the average subsea cable project.

Rafael Arranz, chief operating officer for Telxius, says: “All of these applications, especially everything that is driven by video, consume a huge amount of bandwidth. So everybody needs to be connected with a high-volume, high-bandwidth infrastructure. With its unique route, this cable is going to be able to absorb and deliver back-and-forth traffic to strengthen communications, not just across the Atlantic, but across the globe.”

Brad Smith, president of Microsoft in a statement said, “Marea comes at a critical time. Submarine cables in the Atlantic already carry 55% more data than trans-Pacific routes and 40% more data than between the US and Latin America. There is no question that the demand for data flows across the Atlantic will continue to increase and Marea will provide a critical connection for the United States, Spain, and beyond.”