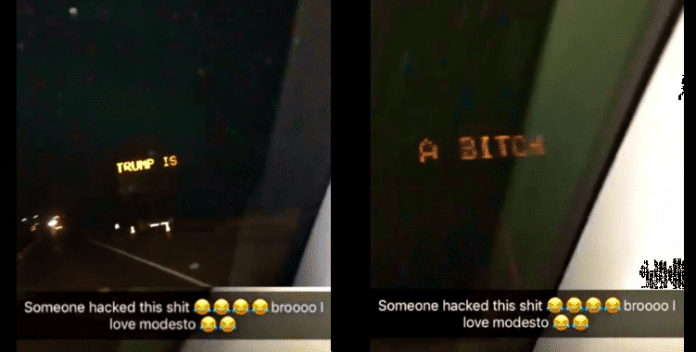 Road sign hacked to read ‘Trump is a bitch’

Traffic signs put up along streets are meant to warn drivers of road construction, speed limits, etc. Quite a few of these road signs have gone digital, thereby allowing a worded message to be displayed that can be changed as needed. One such traffic sign in the city of Modesto, put up to inform drivers of road work under progress ahead, was hacked into and changed to display an explicit message directed towards President Trump.

The Stanislaus County message sign was set up on Carpenter Road with the intention of informing passing drivers that there was construction work going on further down the road. Kelly Glenn, who lives near the sign reported that the sign had been changed to display “Trump is a b****”. “Oh man, I thought it was pretty crazy,” Glenn said.

“Someone looked like they came to a dead stop like they were trying to get a picture maybe or something, and then there was another car coming up behind them,” Glenn said.

Stanislaus County Public Works Director Matt Machado said that in the decade that he has been on the job, this was the first time he had witnessed anything like this.

The prankster apparently cut cables to make the change. Once done, he stole the display’s controller and locked the unit with a padlock of his own so that officials would not be able to change it.

“We have typos from time to time, contractors will type in a word wrong, but you can see the intent is there, just a misspelling,” Machado said. “Well, you know, I think the message could have been seen as light-hearted, but it’s really pretty serious.”

This prank exposes how easy it can be to break in and change signs. While this one might have been meant to be taken as a light-hearted joke, the consequences could have been much more serious. Machado has said that there are nearly 2,000 accidents on county roads every year, nearly 30 of those resulting in deaths. Signs like these are put up to prevent them, but meddling with them can cause more harm than good – by distracting drivers which may lead to accidents.

“Absolutely, that’s a concern, and so we’ll be chatting with our contractor to have better protective measures in place, because if bolt cutters will get you in that’s not good enough,” Machado said.

The sign board is expected to be back up on Wednesday – which is when the replacement parts are expected to arrive – with the correct display.