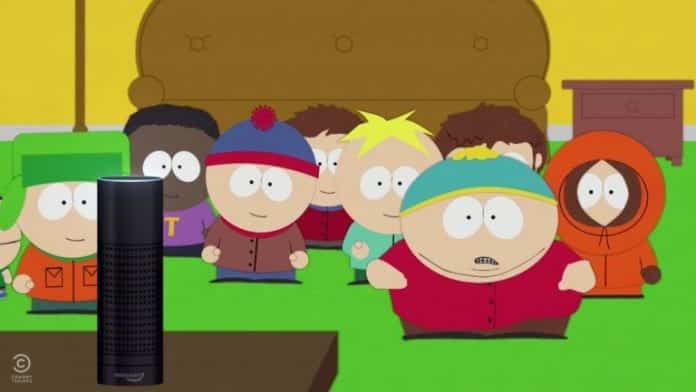 It seems that the episode had Cartman falling in love with Amazon’s Alexa and giving it some NSFW commands. Little did the actual owners of Amazon Alexa and Google Home know that their product would follow the onscreen commands to the tee. The South Park S21E01 “White People Renovating Houses” was telecast on Comedy Central on Wednesday, the homes which had Alexa and Google Home followed every command that Cartman ordered his onscreen Amazon Alexa and the real-life digital assistants were foul-mouthed and sweary causing some strain among fans. As soon as the episode was aired, people took to Twitter with the fun or embarrassment they faced.

Who else’s Alexa’s keep going off every time Cartman says something on the Alexa during this South Park episode ? #SouthPark21 pic.twitter.com/strwnTST23

We have an Alexa and a Google Home and South Park repeatedly screwed with both of them tonight.

And there were some wild commands as well.

This @SouthPark episode has set my @amazon Alexa off about 15 times so far. Had to unplug it

This @SouthPark episode has set my @amazon Alexa off about 15 times so far. Had to unplug it

Some fans had the fun of their lifetime with the real-life NSFW commands that their Alexa and Google Home followed.

@SouthPark nailed it tonight. In other news I have an erroneous alarm set for 7am and a set of hairy balls on my shopping list. #alexa

My Alexa put titty chips on my shopping list and said some pretty colorful things. Haven't laughed that hard on a while. #tittychips pic.twitter.com/IumPMXZK0I

South Park fans should thank Comedy Central because without Cartman they wouldn’t have known that their Amazon Alexa and Google Home could go to such depravity!!!