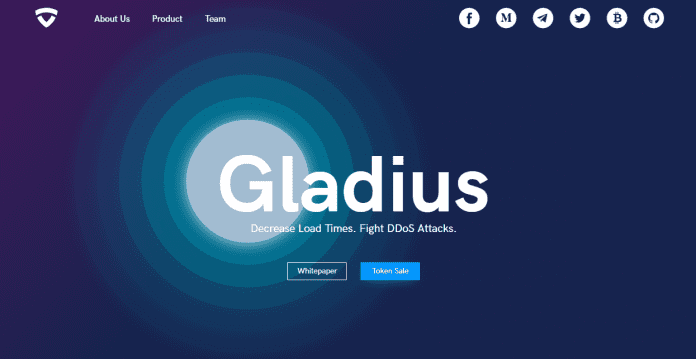 Over 143 million people were recently affected in the massive credit bureau hacking event, the SEC is admitting that personal data was hacked from their filing system.

Even the famous Deloitte  has suffered a major hacking setback.

On the flip side, however, consumers are wanting faster loading times, which has driven web companies to CDN (content delivery network) services to obtain the increasing bandwidth, though not without price challenges. Traditional CDN platforms are quite limited in real-world solutions, and can be quite costs.

With hackers cutting into the most secure sites with ease, and overall expenditures for CDN and DDoS mitigation services rising rapidly, we need a better solution.

Gladius, a cyber protection network has created a new platform built on blockchain which may be the answer.

One of the most common hacking events is called a distributed denial-of-service (DDoS). A DDoS attack occurs when a pool of already hacked systems target a single

server or website. The hacked machines flood the target with requests, packets, and data points eventually overwhelming the processor, resulting in a shut down and finally a denial of service to legitimate users.

Some software does exist that attempts to foil DDoS attacks, but these traditional platforms are often ill equipped to handle the huge amount offending traffic, and, of course, after one machine is compromised, others will quickly follow suit. Normal DDoS services must control the huge data stream from this expanding bank of machines and often get overwhelmed.

While DDoS attacks are on the rise, CDN services are also growing increasingly difficult to use. Current platforms can be very costly and often glitchy. The traditional model uses with location-based servers internationally to store a cache of web content in order to quickly reach the site from any machine in the world.

While this model does work, it has its limitations. For starters, traditional platforms can be extremely expensive to use. Today’s data-heavy website environment requires large data caches, and since such platforms are priced per GB, substantial web traffic can cost companies millions in hours.

Blockchain technology is the newest fad among the technocratic elite. The software creates a distributed way to solve both these plaguing issues. The process is proceeding through decentralization. Decentralization is the movement of data the onto a larger number of participant machines through a connected database environment.

Gladius has seen the need for a solution in the space, and is currently initializing this decentralized model to pool unused bandwidth among its members, which in turn creates a decentralized bandwidth platform.

The company uses the large-scale bandwidth to effectively block DDoS attacks and offer affordable CDN services to its clients. By using the most important aspects of legacy DDoS protection software, while providing superior protection and CDN services at more reasonable rates, Gladius is poised to both accelerate and protect at the same time, effectively ending the existing dilemma.

DDoS Out, Security in

Consumers are able to monetize unused bandwidth, and collaborate with others in order to create huge bandwidth pools that are able to handle a massive flood of packets and traffic that characterize a DDoS hack.

Gladius also offers direct interactions with end users and internal developers. This means that consumers who are seeking protection can ask for customized security packages to be developed and managed on the platform.

Additionally, Blockchain technology means that every transaction within the ecosystem is a public record. Consumers can know immediately whether their purchase of protection is really fair.

The substantial pools of available unused bandwidth provided by participants within the platform allow Gladius to offer CDN services within the network. Because Gladius removes the centralized hub, costs can be far more aggressive and reasonable.

Additionally, the decentralized platform model means transparent pricing models with simple interaction between platform participants. While legacy CDN companies must maintain processors, storage, and bandwidth, Gladius can offer decentralized tools in the same vein, but without the overhead.

There’s no question that blockchain technology will reinvent much of what we know of as technology. Gladius promises to disrupt both CDN and DDoS industries at the same time. .

To participate in the venture, visit their website and join the initial coin offering (ICO). It begins November 1st, and, depending on the first round results, will continue for up to a month. The beta version will release Q1 2018, and the full version is scheduled for August of 2018.