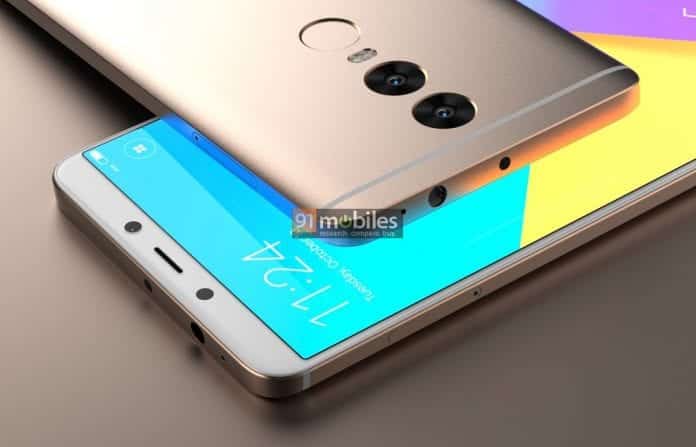 Last month, the Chinese OEM, Xiaomi launched the Redmi Note 5A smartphone with MIUI 9. Now, the company is working on a larger offering to its customers, the Redmi Note 5.

According to leaked renders shared by tech publication 91Mobiles, the alleged Xiaomi Redmi Note 5 might feature a 5.5-inch full HD (1080×1920 resolution) display with bezels similar to its predecessor, Redmi Note 4. The renders of the Redmi Note 5 also show a dual-camera setup on the back of the phone, which is expected to be the combination of a 16MP and a 5MP sensor along with dual-tone LED flash.

The Redmi Note 5 seems to have a metal unibody design like the Redmi Note 3 and Note 4 along with centrally-mounted fingerprint reader on the back. It will also have capacitive navigation buttons on the front, a 3.5mm audio jack and IR blaster as well. The device is expected to be equipped with either an octa-core Snapdragon 630 or Snapdragon 660 SoC chipset based on the 14nm process. The smartphone is also rumoured to come in two variants – 3GB or 4GB of RAM and 32GB or 64GB storage variants. The device is believed to have a 12MP front facing snapper for selfies, a USB Type-C port, carry a 4,000mAh non-removable battery, and support Quick Charge 3.0, 4G VoLTE, Wi-Fi, NFC, GPS. The Redmi Note 5 is rumoured to run Xiaomi’s new MIUI 9 based on Android 7.1.1 Nougat OS.

Please note that these are concept renders, and not actual leaks of the device. There are likely to be many changes to the specs and features before the final device is released. So, keep watching this space for more updates on the Redmi Note 5.