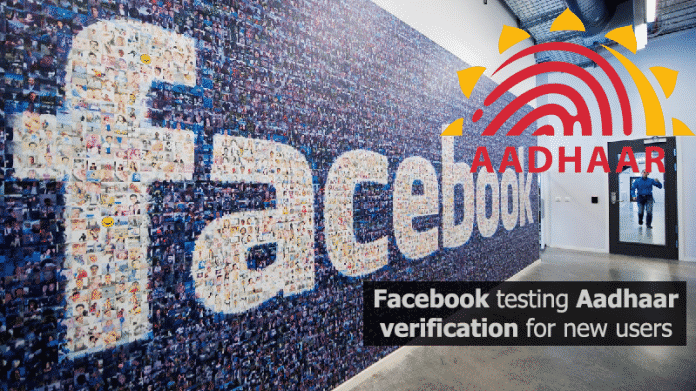 The Government of India has made it mandatory for its citizens to link their Aadhaar card with bank accounts, PAN, insurance policies, small savings schemes like PPF and NSC, mutual fund investments and social security schemes to make it the most authentic identity proof.

For those unaware, Aadhaar is a unique identification document bearing a unique 12 digit Aadhaar number, that is issued to an individual by the Unique Identification Authority of India (UIDAI).

Now, Facebook, the social networking giant, too has followed suit and is apparently encouraging its new users in India to use their real names on its site as shown in their Aadhaar card while creating a new account.

“What’s your name? Using the name on your Aadhaar card makes it easier for friends to recognise you,” the prompt reads.

The testing was first spotted by users on Reddit and Twitter. However, the prompt while creating a new account is a small test and expected to be available only to a small percentage of people who use Facebook’s mobile site (m.facebook.com). This is an optional prompt, and users are not required to enter the name on their Aadhaar card nor have to upload a photo of their Aadhaar Card or perform any other such verification step at the moment.

“We want to make sure people can use the names they’re known by on Facebook, and can easily connect with friends and family. This is a small test where we provide additional language when people sign up for an account to say that using the name on their Aadhaar card makes it easier for friends to recognize them. This is an optional prompt which we are testing, people are not required to enter the name on their Aadhaar card,” said Facebook spokesperson to GadgetsNow in an emailed statement.

If log-in to Facebook account with Aadhaar card feature becomes a reality, it could help the social networking giant to counter fake accounts and discourage users to use bogus names.