‘Game of Thrones’ continues to remain at the top as the most popular TV show for illegal downloads and streams on the internet for the sixth time in a row, according to TorrentFreak, an online publication that calculates (among other things) the number of times shows are illegally downloaded.

Game of Thrones was followed by ‘The Walking Dead’ in the second position, while ‘The Flash’ came in at third position. While Prison Break made a comeback, TV series like Rick and Morty and Sherlock also made an appearance on the list as the most pirated TV shows of 2017.

HBO, the English entertainment channel, that airs the Games of Thrones serial had a difficult time this year, as it was inundated by hacks, leaks, and piracy, of course. Nonetheless, the season 7 of Games of Thrones with record-breaking TV ratings was the most-viewed season up until now.

Game of Thrones has the honor of becoming the most-downloaded TV show through BitTorrent for the sixth year in a row.

Considering traffic-wise, the interest for the serial was ample, even though there was no new swarm record. Immediately after the season finale came online, the maximum number of people actively sharing an episode across several torrents was recorded as 4,00,000.

TorrentFreak has compiled list (see below) of the most torrented TV shows worldwide (single episode) for 2017, which is based on several sources, including statistics reported by public BitTorrent trackers. 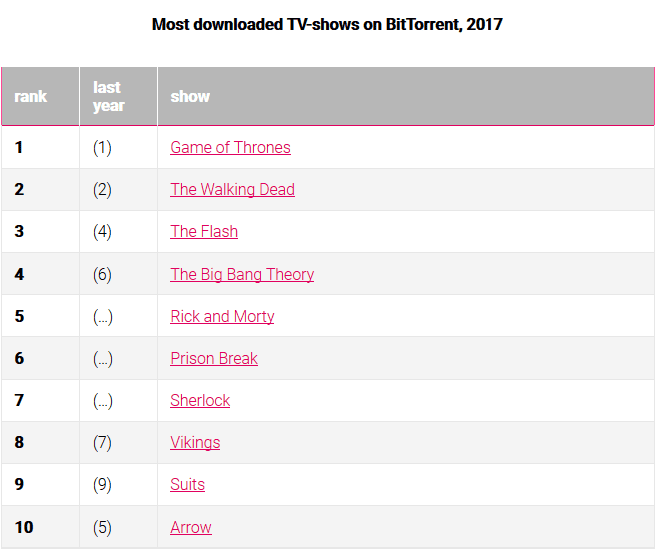