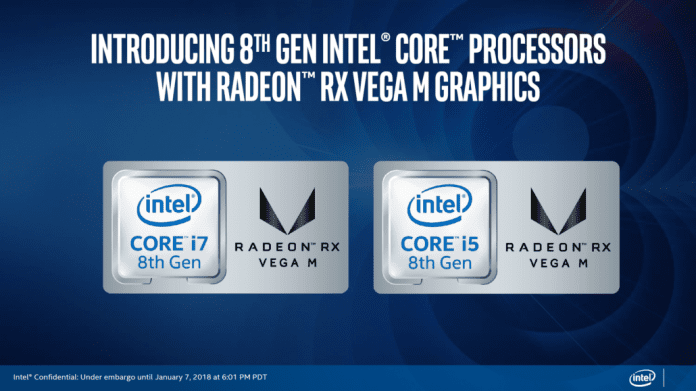 In November 2017, AMD and chipmaker Intel had announced an unprecedented partnership that would bring a custom AMD’s Radeon RX Vega M graphics to a new lineup of Intel’s 8th-gen Core processors.

“The G series brings together the best of both of these worlds; what it allows us to get is much more performance into a thinner and lighter class system, whether it’s a mobile platform or a small form factor desktop,” Intel director of Client Graphics Marketing John Webb said.

On the other hand, Scott Herkelman, Vice President and General Manager, AMD Radeon Technologies Group in a statement said, “Our collaboration with Intel expands the installed base for AMD Radeon GPUs and brings to market a differentiated solution for high-performance graphics.”

Herkelman added, “Together, we are offering gamers and content creators the opportunity to have a thinner-and-lighter PC capable of delivering discrete performance-tier graphics experiences in AAA games and content creation applications.”

The new 8th Gen Intel Core processor will come in two configurations: GH (Graphics High) and GL (Graphics Low). While Radeon RX Vega M GL Graphics (65W total package power) is meant for high-end laptops, the other RX Vega M GH Graphics (100W total package power) features a slightly faster CPU and GPU configuration that could be found in devices like next-generation desktops or a new generation of the Intel NUC. The GL variant bundled with Intel’s new 8th generation will come with Core i5 and i7 processors, while the GH will only come with an i7 processor.

The new 8th-generation, quad-core Core i5 and Core i7 chips, together with the Radeon RX Vega M GPU, will power laptops from Dell and HP. The new chipset is also included in new Intel-branded “Hades Canyon” NUCs that will come in two versions. While the more powerful one is the $999 VR-ready NUC8i7HVK sporting the 100W TDP unlocked Core i7-8809G with the 1,063MHz Radeon RX Vega M GH, the other SKU is the $799 NUC8i7HNK having the 65W TDP Core i7-8705G with the 931MHz AMD Radeon RX Vega M GL GPU.

Hades Canyon is the first NUC that is VR-ready and can be used with Windows MR headset or any other VR device like the Oculus Rift or HTC Vive. On the connectivity front for the same, there are HDMI 2.0a ports on both the front and rear of the device, two Thunderbolt 3 ports, and a total of five USB 3.0 Type-A ports. Additionally, a USB 3.1 Gen 2 port, which supports data transfer speeds of up to 10Gbps is also available along with dual gigabit Ethernet ports.

According to Intel, “EMIB acts as a high-speed intelligent information bridge between the GPU and HBM2 and reduces the usual silicon footprint to less than half that of discrete components implemented separately.”