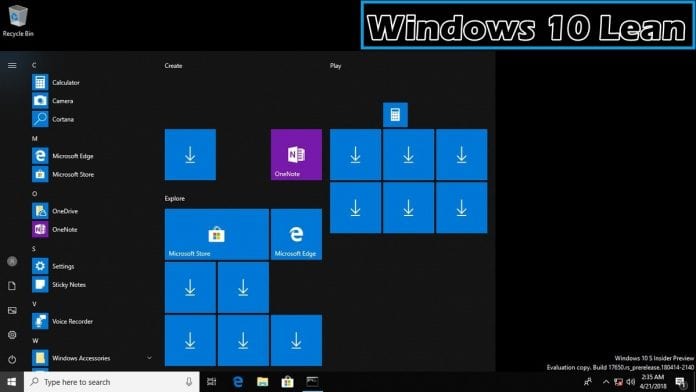 Microsoft is apparently working on yet another version of Windows called ‘Windows 10 Lean’ that could be perfect for low-end PCs.

Spotted in the ISO for the latest Windows 10 Insider Preview, build 17650, Windows 10 Lean is a new lighter version of Windows 10 that uses approximately 2GB less space on x64 systems than Windows 10 Pro.

The new OS variant, Windows 10 Lean (also referred to as Windows 10 CloudE) was discovered by Twitter user Lucan when the new Redstone 5 insider build was released.

Welcome to Windows 10 Lean/CloudE/S (once again?)
This new edition started shipping with this week's Skip Ahead build (17650)
It seems to be heavily cut down, an x64 clean install is roughly 2 GB smaller than Pro
Its edition ID is 0xB7 which was missing from SDK headers pic.twitter.com/2Sn3SVXeZB

Windows 10 Lean cuts out several standard apps and features that are usually installed in Windows 10 in exchange for saving space. For instance, features such as Registry Editor, the Microsoft Management Console, and Microsoft Office are missing, while desktop wallpaper is disabled by default. Further, CD and DVD drives cannot be installed, and Microsoft Edge doesn’t allow downloads. Inbox apps such as the legacy Internet Explorer, Photos, Maps, Groove Music, Paint, Movies & TV, are also missing. However, Windows 10 Lean does include placeholder buttons that allows you to download and install an app or feature as necessary.

At first, it may appear that Windows 10 Lean is an alternative to Windows 10 S (which only allows app installation from the Windows Store), but Lucan quickly pointed out that this version does not have normal restrictions that are usually found in Windows S version.

While ZDNet’s Mary Jo Foley speculated in a chat with Lucan that Windows 10 Lean could simply be S mode for Enterprise or Home editions, currently there is no clarity as to what Microsoft plans to do with the release of Windows 10 Lean. At present, we will just have to wait and watch!