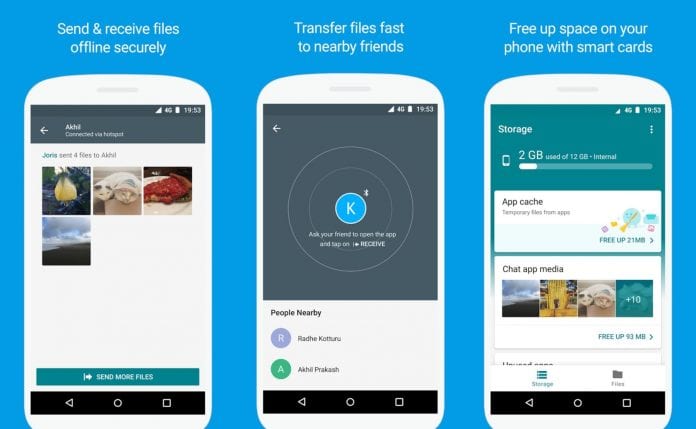 Last year, Google had released a new app called Files Go for Android devices that was designed to help with file management and making offline sharing easier for users with lower-end devices in regions with limited connectivity.

For those unaware, Files Go, the default files manager app of Android Go devices, helps users to quickly locate content on their devices in one place, free up space on their devices, show users how much space they have used on their device, find and delete duplicate files, lengthy videos, back up files to the Google Drive, clean cache, uninstall unused applications and more. It also allows users to share files locally without the need for internet connection just like Apple’s AirDrop feature.

Now, in the latest update to the Files Go app, Google brings improvements to the software’s offline sharing feature with a new sharing tab and faster transfers.

The major upgrade to the Files Go app includes the following features:

Easier to find and use: Nearby sharing is now available in its own dedicated tab called “Share.” This tab has a simplified and smoother interface, and it works on any Android phone from the latest Google Pixel back to Android 5.0 (Lollipop).

Faster transfers: Files Go picks the fastest method of sending files available on your phone, such as 5GHz Wi-Fi Direct, so you get the highest transfer speeds possible. Users have seen speeds up to 490 Mbps—that’s four times faster than before, or 100 original quality photos sent in less than five seconds.

More secure: Files Go helps you verify that you are connecting to the right person and encrypts all your transfers for additional security.