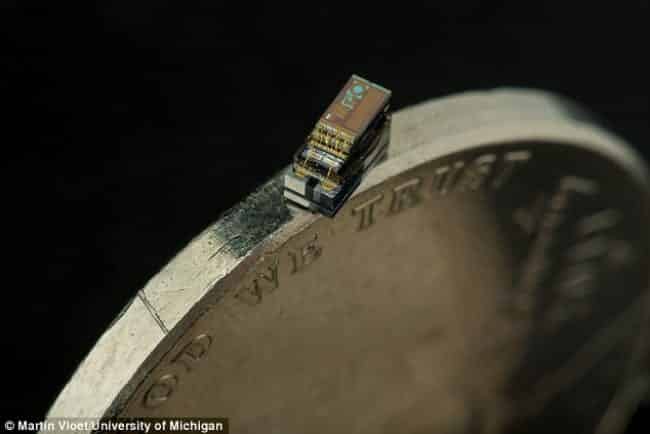 Researchers at the University of Michigan (UM) in the United States have created the world’s smallest computer that measures just 0.3 mm x 0.3 mm in size and is completely dwarfed by a grain of rice.

“We are not sure if they should be called computers or not. It’s more of a matter of opinion whether they have the minimum functionality required,” David Blaauw, a professor of electrical and computer engineering in the University of Michigan said in a press release.

The world's smallest computer is unbelievably small! Measuring just 0.3 mm and completely dwarfed by a grain of rice, the computer was developed by researchers from the #UniversityOfMichigan. @U_of_michigan https://t.co/426tn835Dt

The Michigan Micro Mote consists of a processor, system memory, a base station, wireless transmitters and it receives and transmits data with visible light. It uses photovoltaics, a method of converting light into electricity, for sending and receiving data. The base station provides light for power and programming, and it receives the data.

“We basically had to invent new ways of approaching circuit design that would be equally low power but could also tolerate light,” Blaauw said.

The light from the base station, and from the device’s own transmission LED, can make currents in its tiny circuits. The device was designed using a precision sensor that converts temperatures into time intervals, defined with electronic pulses.

The system is very flexible and the success of tiny computing means that it could be used for a variety of purposes, such as pressure-sensing inside the eye for glaucoma diagnosis, cancer studies, oil reservoir monitoring, biochemical process monitoring, audio and visual surveillance, and tiny snail studies.

“Since the temperature sensor is small and biocompatible, we can implant it into a mouse and cancer cells grow around it,” said Gary Luker, a professor at University of Michigan.

“We’re using the temperature sensor to investigate variations in temperature within a tumor versus normal tissue and if we can use changes in temperature to determine success or failure of therapy,” added Luker.

“When we first made our millimeter system, we actually didn’t know exactly all the things it would be useful for. But once we published it, we started receiving dozens and dozens and dozens of inquiries,” Blaauw said.

The new microdevice was invented by Blaauw along with Dennis Sylvester, also a professor of electronics and communication engineering at the university, and Jamie Phillips, an Arthur F. Thurnau professor. Further, the device was invented in collaboration with Mie Fujitsu Semiconductor Ltd. Japan and Fujitsu Electronics America Inc and was presented at the 2018 Symposia on VLSI Technology and Circuits on June 21.

In March this year, IBM had revealed their 1mm x 1mm computer that measured smaller than a grain of fancy salt at its Think 2018 conference. However, with the invention of this new device, the University of Michigan has regained its title of making the world’s smallest computer from IBM.