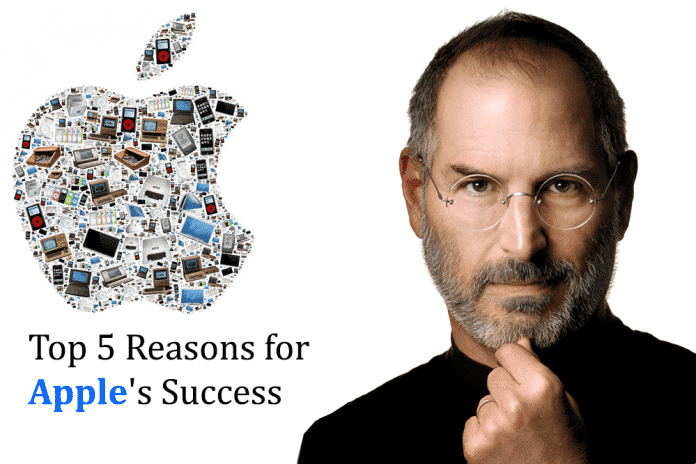 Apple needs no introduction. As a matter of fact if you search for the word apple then you might end up with Apple Inc. This company has become one of the most successful companies in the world.

All thanks to its 3 founders Steve Jobs, Steve Wozniak, and Ronald Wayne. Ronald Wayne left Apple only after 12 days of its launch and the reason is that he saw no success of apple. But Steve jobs proved him wrong. He became the most successful entrepreneur in the world and made apple reach the heights of glory.

So what are the reasons for Apple Success? Let’s find out.

The key secret behind the success of any business is its Vision and Apple has the vision to deliver the best quality product to its consumers. Apple makes some of the best products in the market available today. The main idea is to create products for the who make them. The engineers who are creating Apple products actually make them for themselves. And Jobs was the chief “user” of Apple products when he was alive. With the guidance of Steve, Apple became more confident in their products and hence that energy and vibes are ultimately delivered to the consumers.

The products of apple are so easy to use even that a 6-year-old kid can use it. Jobs were very concerned about this point. He really wanted to make products which are easy to use. According to him if it is not easy to use, it is considered worthless to the consumer. This is what drove the company towards its own software and hardware for the products such as iPad,iPhone,iMac and MacBook Pro to ensure full control over the devices. Apple always believed in perfection, not abundance.

As both hardware and software are made by Apple they ensure full security and control over their devices. Apple test each product thousands of times before launching it in the market. They also control all software and hardware related issues. Apple constantly works on new updates so that users can experience the best possible efficiency in products. They are also very strict regarding the apps on App Store and ensure full safety of user data. Their products are much much away from common issues like frequent app crashes, slow processing, malware attacks etc.

5. Years ahead of the competition

We all know that apple works in advance from its competitors. They are working on a product now which has to be launched two years after. Which is a nightmare for their competition as they can’t match their advance policy. Another reason is that they offer great customer and after sales service which keeps them ahead from other brands. You can yourself experience this by visiting their stores. The best part is if your iPhone or iPad or whatever product you use have any issue they might replace it with the new device rather repairing it.

All these reasons were responsible for their tremendous success.