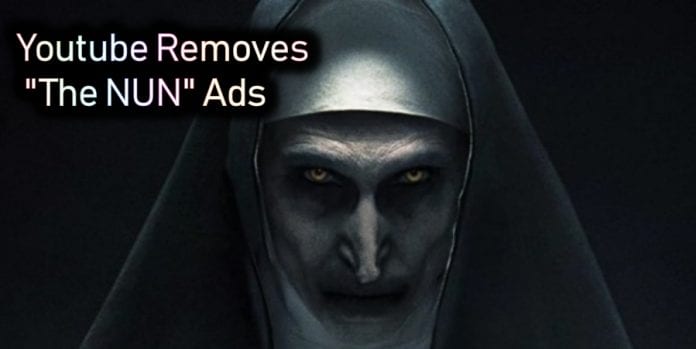 YouTube bans ‘The Nun’ trailer because it is too scary

YouTube has reportedly pulled down the trailer of the new horror movie ‘The Nun’ after viewers found it to be too frightening. ‘The Nun’ is the fifth installment from “The Conjuring” franchise.

For those unaware, The Nun is an upcoming American gothic supernatural horror film that is a direct spin-off of 2016’s The Conjuring 2 and is directed by Corin Hardy (The Hallow). The story is set in 1952, where a Catholic priest and a novice are sent by the Vatican to investigate the mysterious suicide of a nun at an abbey in Romania.

On August 12, 2018, a six-second trailer for the new film was released on YouTube. The trailer first shows the screen with its sound being turned down. A few seconds later, horrifying image of “The Nun” character suddenly pops up along with some terrifying sound effects and a blood-curdling scream that may make anyone jump from their chair.

Some even described the ad as deceptive with no prior warning regarding its content, which may be scary for younger audiences or heart patients as well. What makes it worse is that the six-second trailer is not unskippable.

WARNING! If you see an ad on youtube with the volume sign ??? being turned down and nothing else, ITS A JUMPSCARE for the new NUN movie coming out. i advise you look away and/or turn down the volume if you have anxiety or just straight up hate jumpscares, pls rt to save a life

Appreciate you bringing this to our attention! This ad violates our shocking content policy and it's no longer running as an ad. More info here: https://t.co/dOUocjUevh

Indeed, the website’s policy does note that it has the right to refuse “promotions containing violent language, gruesome or disgusting imagery, or graphic images or accounts of physical trauma, or promotions that are likely to shock or scare,” ensuring that they “strive to avoid offending or shocking users with ads, websites, or apps that are inappropriate for our ad network.” However, this normally refers to real footage rather than adverts.

The entire drama has been viewed by some Twitter users as a publicity stunt to bolster The Nun’s marketing campaign and create buzz to promote the movie.

It’s one way to create a buzz about the film, people are drawn to the negative press and their audience grows. It would be preferable that they give users the ability to disable or blacklist certain genres or products, but YT isn’t that well known for its customer service ethics.

The Nun is expected to hit the theatres on September 7, 2018. Are you ready to get spooked?