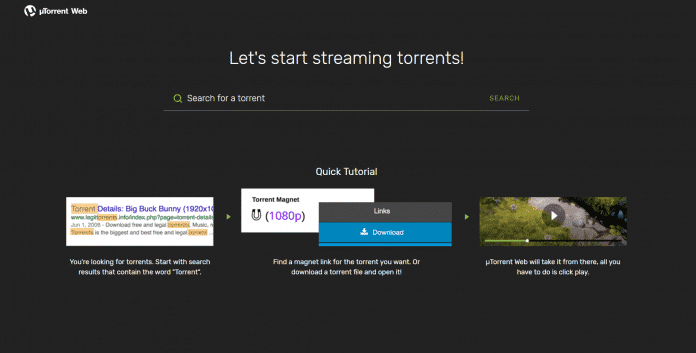 uTorrent Web is the next generation of torrenting from BitTorrent

BitTorrent, Inc., the company behind the world’s most popular P2P communications protocol, has officially released the first version of µTorrent Web to help users quickly download and play torrent files inside their browser.

µTorrent Web (not to be confused with uTorrent) is a Web-based torrent client for Windows that aims to make torrenting simpler and most importantly it supports torrent streaming.

“Our vision for µTorrent Web was to build a torrent client with quick playability and simplicity at its core,” said BitTorrent, Inc. in a press release statement.

“Through years of serving the BitTorrent community with products used by hundreds of millions of users, we took our passion and experience to build a torrent client that meets the streaming demands of today’s users.”

BitTorrent commonly refers to the infamous peer-to-peer (P2P) file-sharing protocol associated with piracy. Each year, BitTorrent’s desktop and mobile products are installed on hundreds of millions of new devices across 138 countries worldwide.

ALSO READ: Here’s all you need to know what Torrents are and how they work

Despite the web-based version release, BitTorrent will continue to maintain the desktop version of uTorrent, now referred as uTorrent Classic.

“As µTorrent Web now comes out of Beta and into full release, we know that millions of our users are familiar with and love the desktop version of µTorrent, also known as µTorrent Classic.

Our long-term plan is to continue development across both products and make them available on utorrent.com,” the company notes.

The product can be downloaded at utorrent.com and is currently available only for Windows. However, the company has plans to release a Mac version in the future.

The application is compatible with all major browsers such as Chrome, Firefox, Internet Explorer, Opera, and Microsoft Edge.

Check out the video below by µTorrent Web Product Designer Cory Keller, where he speaks about the new version of the torrenting tool.