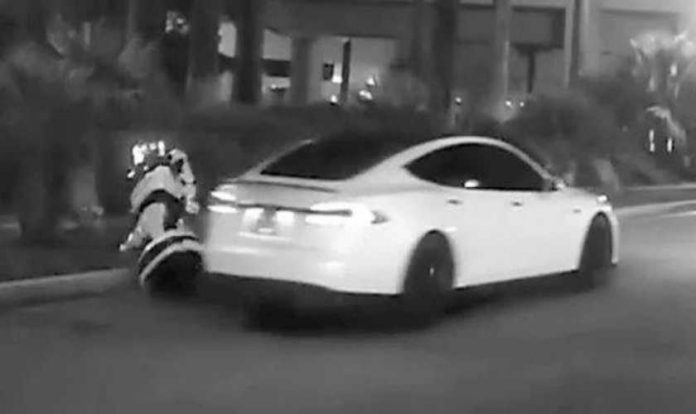 A self-driving Tesla Model S hit and “destroyed” an autonomous robot in a car accident in Las Vegas on Sunday night, ahead of Consumer Electronics Show (CES) 2019.

The incident took place around 7 p.m. in Paradise Road, Las Vegas where the robots called Promobot, were being transported to the Congress Hall by the Promobot engineers to be used in the company’s booth in CES 2019.

For those unaware, Promobot, the company’s new model v4 robots, is a part of a collection of autonomous robots designed for business purposes, which can be rented for $2,000 a day. They perform the functions of administrators, promoters, hostesses, Museum guides, consultants, concierges, and many others.

Although all the robots were moving in a line, one of them missed its way and drove to the roadway of the Congress Hall’s parking lot. Just then, it was hit by a self-driving Tesla car.

The impact of the car pushed the robot aside and it fell down. However, the car continued driving after the accident and stopped only some 50 meters away from the accident site.

The passenger, George Caldera, who was in the car at that time, said that he was trying out the self-driving mode (Full Self-Driving Capability mode) and decided to test it in an empty area.

Caldera said, “There was nobody there, no men, no cars.‘I switched this Tesla into a self-driving mode and it started to move. And wow! A robot on the track! I thought the flivver would come round, but it bumped straightly into it! I am so sorry, the robot looks cute. And my sincere apologies to the engineers.”

The robot suffered some serious damage, as parts of its body, head, arm mechanisms, and movement platform were completely destroyed.

Oleg Kivokurtsev, Promobot’s Development Director said, “Of course we are vexed. We brought this robot here from Philadelphia to participate at CES. Now it neither can participate in the event or be recovered. We will conduct an internal investigation and find out why the robot went to the roadway.”

The incident is currently being investigated by the Nevada Police Department.