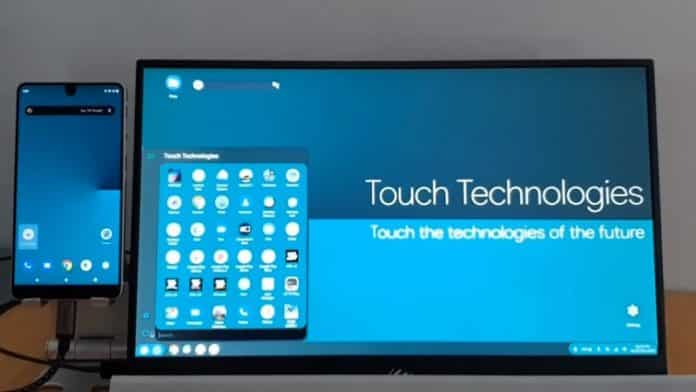 We all know that Google’s upcoming operating system, Android Q will be the first OS to natively support desktop mode on compatible devices.

Similar to Samsung’s Dex, Android Q’s desktop mode feature can be accessed by connecting the smartphone to a display using a USB Type-C to HDMI cable.

With months to go before a stable version of Android Q launches, a developer has released a video on YouTube that shows off a custom launcher for Android Q’s upcoming Desktop Mode.

While the features of the native launcher are basic, developer Daniel Blandford used the latest Android Q beta, added his own custom launcher, and got the Android Q running on PC. The video gives us a better overview of how Android Q’s desktop mode works.

To make the magic work, Blandford used an Essential Phone to download the latest Android Q beta version and an Android launcher that he created. He then connected his phone to the monitor as well as to a portable Bluetooth keyboard and mouse.

It is important to note that in order to make the desktop mode look and make it work like Blandford’s, you should know how to modify and create your own launcher.

Moving further, as you can see from the video, the launcher can be themed, just like any other customizable Android launcher. Besides the basic desktop shortcuts, there is also a Windows-style menu and a bottom taskbar. The taskbar also displays phone’s battery life, volume controls, Wi-Fi, Bluetooth, freeform windows, and other things. One can see the usual display of status icons and time and also support for widgets and varying themes. The launcher even has input support for mouse and keyboard.

However, there are some critical bugs in it such as right-clicking on the mouse leads to crashing of application. Also, the launcher is unable to display running apps icons on the taskbar. Further, the phone’s screen cannot be turned off without the desktop mode going into a screen saver.

With still a few months to go before the stable version of Android Q is released, one hopes Google decides to support desktop modes natively in the public release of Android Q, reports Android Police.

The stable version of Android Q is expected to be released somewhere in Q3 of 2019.