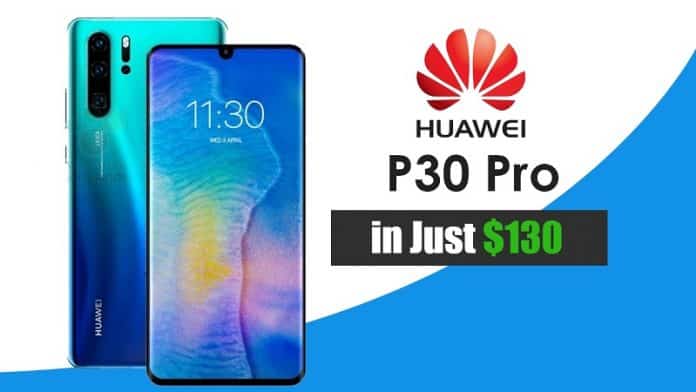 Chinese smartphone maker Huawei is going through its darkest ever phase following the U.S. government trade ban. The company received another setback, as the price of Huawei P30 Pro smartphone has come down crashing to $130, reported Forbes taking a lead from a UK smartphone trading site, musicMagpie.

For those unaware, U.S. President Donald Trump recently signed an executive order that effectively bans American companies from using telecommunications equipment made by firms deemed to pose a national security threat. Shortly after Trump’s executive order, the U.S. Commerce Department added Huawei to its so-called “Entity List” in a move to cut off the Chinese company from American suppliers and ban it from doing business in the U.S.

Due to the trade ban, American companies such as Google, Intel, Qualcomm, Broadcom, and even ARM, a UK company have stopped working with Huawei. Also, SD Association, Wi-Fi Alliance, JEDEC, have distanced themselves from Huawei.

The Huawei P30 Pro with 256GB storage and 8GB RAM, which was barely launched three months ago was priced the same as Samsung S10+ with equivalent storage. With the value of the P30 Pro dropping to $130, the resale value of the smartphone has come down up to 90% of its retail price of $1,150. On the other hand, the trade-in value of South Korean giant Samsung’s Galaxy S10+ is around $650.

The fall in the trade-in-value of P30 Pro sends a strong warning to the well-known Chinese smartphone maker Huawei.

“The smartphone sector has a dynamic exchange and resale market, which encourages upgrades and growth,” reported Forbes cybersecurity specialist Zak Doffman on its website. “And so, the new mobile market is based on its second-hand resale market, the same is true for cars as well, if the used car market reaches the top, it also affects the sales of new cars as well.

“The price of the well-known Chinese smartphone maker, Huawei’s best smartphones begins to fall so much just within a week after the ban was confirmed by the US Government, and as a result of this down is the reflection of a volatile market which is driven more by the feeling of the brand and advertising than by reality.”

As the back and forth between the U.S. and Chinese governments continue, only time will tell whether or not Huawei will be able to cope with the challenges thrown at it.