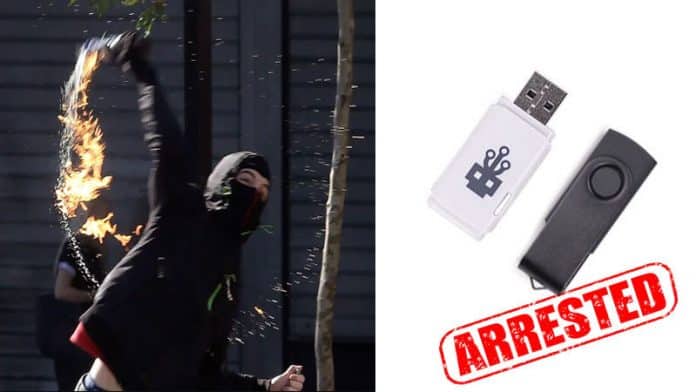 A Belgium hacker was sentenced to eighteen months in prison after his USB drive was found at the scene of a Molotov cocktail attack on a bank in 2014, reports ZDNet.

The accused, a 35-year-old man from the Belgian city of Roeselare, who is an active member of the hacking groups Cyber Crew and Anonymous Belgium, was initially arrested in 2014 for attempting to set fire the Crelan Bank office in Rumbeke, a suburb of Roeselare, using the Molotov cocktail.

The authorities were able to track him from the USB flash drive that he had dropped on the ground after/while throwing a petrol bomb on the bank. Ironically, the data on the thumb drive led to the accused being identified only by “Brecht S” in court documents.

Also read- Top 10 Hackers Of All Times According To Anonymous

A house search and further investigation into the perpetrator’s background led the Belgium police to discover that Brecht had also launched a distributed denial of service (DDoS) attacks against Crelan’s e-banking portal, which took the portal down for many hours on several occasions.

Brecht said he attacked the bank because he wanted to take revenge on Crelan. According to him, an amount of €300,000 ($342,000) had disappeared from this mother’s Crelan account following the divorce from his father. He said that when Crelan officials refused to meet with him, he decided to attack the bank for the financial losses incurred by his mother.

He also stated that he was facing a difficult period at the time and was involved in drugs.

Besides attacking Crelan bank, Brecht was also involved in several operations of the collectives of hacker group he belonged to, which included one targeted at FIFA, the international soccer/football federation.

He had also shut down the website of an unnamed pizza restaurant numerous times with DDoS attacks and blackmailed them by asking for a ransom payment in exchange for allowing the site to function.

The investigation into Brecht also revealed a co-conspirator, a 44-year-old man, also a member of a cybercriminal gang, with whom Brecht had exchanged hacking tools in the past via Facebook. The two were involved in many other cyber-attacks, according to Belgian news site HLN.

Brecht’s co-conspirator was let off without a prison sentence and ordered to pay only a €1,200 ($1,370) fine. However, Brecht was sentenced to spend 18 months in prison and ordered to pay a fine of €3,000 ($3,400) to Crelan Bank as compensation for damages caused by the DDoS attacks.

The recent jail sentence for cybercrime has been added to the already existing three-year prison sentence Brecht got for throwing the Molotov cocktail and arson against the Crelan Bank office.