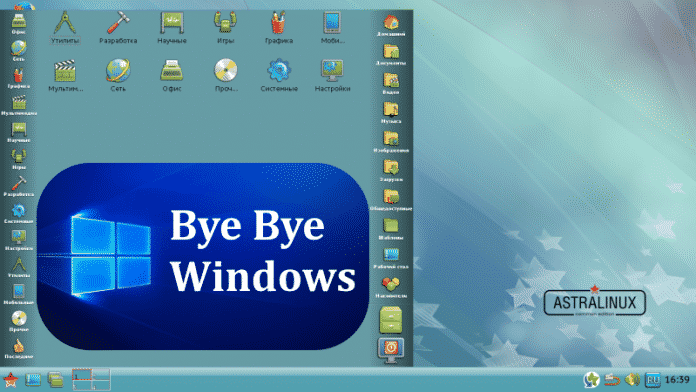 Russian army could very soon be replacing the Windows operating system on its military systems with Astra Linux.

For those unaware, Astra Linux is a Debian-based Linux operating system developed to meet the needs of the Russian army, other armed forces and intelligence agencies. It provides data protection up to the level of “top secret” in Russian classified information grade and has been officially certified by Russian Defense Ministry, Federal Service for Technical and Export Control and Federal Security Service.

In fact, Astra Linux distribution was developed by Russian company RusBITech in 2008 for use by Russian private companies but it was later expanded to the local government sector, where it became popular with military contractors.

Currently, Astra Linux has a security clearance of “special importance” from the Russian Federal Service for Technical and Export Control (FSTEC), which means the OS can now be used in Russian Government offices with the highest standards of data privacy and secrecy.

With Microsoft products installed in the ministry’s computers being ‘vulnerable to cyber attacks’ and also the possibility of the existence of hidden backdoors in the Windows OS has prompted the Russian army to implement Astra Linux in their defense systems. In fact, the Russian defense ministry had already announced the plans to ditch Windows way back in January 2018.

“There is hope that the domestic OS [operating system] will be able to replace the Microsoft product. Of course, this is good news for the Russian market,” German Klimenko, former IT advisor to Russian President Vladimir Putin and chairman of the board of Russia’s Digital Economy Development Fund, a venture capital fund run by the government said while speaking to the Russian newspaper Izvestia on Friday.

“The Russian government doesn’t trust systems developed by foreign companies to handle sensitive data, due to fears of espionage through those systems,” said Justin Sherman, Cybersecurity Policy Fellow at New America. “Using domestically produced technologies to manage sensitive data is just another component of the Kremlin’s broader interest in exercising more autonomy over the digital machines and communications within its borders.”

Sam Bendett, Research Analyst with the Center for Naval Analyses’ International Affairs Group, said, “One of the main sticking points for the Russian government was the fact that imported operating systems had vulnerabilities and back doors that Moscow thought could be exploited by international intelligence agencies…This is essentially Russia ensuring its cybersecurity against potential intrusions.”

Earlier this week, similar reasons were cited for the Chinese Military to replace the Windows OS on their military systems.