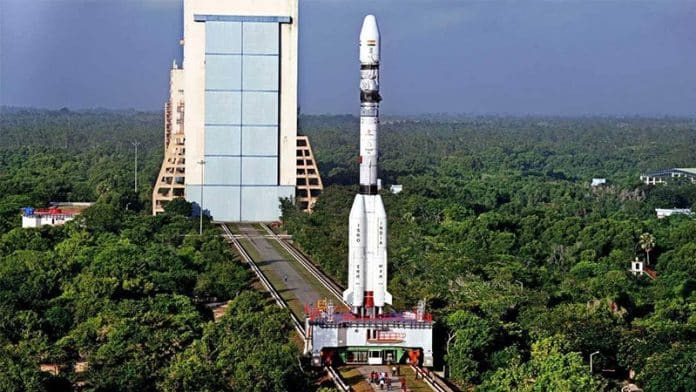 India is gearing up to send its heaviest rocket ‘Bahubali’ into space for its most ambitious second Moon mission, Chandrayaan-2 on July 15. The space mission that will launch from the Bay of Bengal coast aims to place a robotic rover on the Moon’s south polar region.

“Preparations are going at a hectic pace at the Satish Dhawan Space Centre in Sriharikota for the July 15 early morning launch at 2.51 a.m. Everything is progressing normally,” said an official of Indian Space Research Organisation (ISRO).

The Geosynchronous Satellite Launch Vehicle Mark III (GSLV Mk 3) referred to as ‘fat boy’ by ISRO officials is a 640-tonne rocket that will carry the 3.8-tonne Chandrayaan-2 spacecraft to the moon. The huge rocket is also named as “Bahubali” by the Telugu media after the muscular hero of the eponymous fantasy Telugu film.

The Chandrayaan-2 mission will carry three primary payloads – the Orbiter, the lander-Vikram, and moon rover-Pragyaan.

The mission is expected to take about 50 days to maneuver out of the Earth’s orbit and into the Moon’s surface before the lander Vikram finally soft-lands near the South Pole of the Moon on September 6, 2019. It will then perform a series of complex maneuvers including rough braking and fine braking.

The mission will be fully accomplished with the Pragyan rover carrying out scientific experiments while traversing Moon’s surface. The life of the rover is expected to be for just one lunar day (14 Earth days) and it will travel not more than half a kilometer on the moon’s surface.

“Soft landing on the moon would be the most terrifying aspect of the mission as India has never attempted soft landing on another heavenly body,” ISRO Chairman Dr K Sivan told NDTV.

Besides the novelty and scientific achievement, the mission will also try to unfold the origins of the Moon, the Indian space agency said.

Dr. Sivan said, “India is going where no country has ever gone before, very close to the South Pole of the moon on the near side and this prestigious national mission should unveil many secrets of the moon.”

He added, Chandrayaan-2 “Will foster a new age of discovery, increase our understanding of space, promote more global alliances, stimulate advancement of technology and grow commercial opportunities in India and inspire future generations”.

If the Chandrayaan-2 mission is successful, it will make India the fourth country in the world to complete a soft landing on the moon, after the US, Russia, and China.