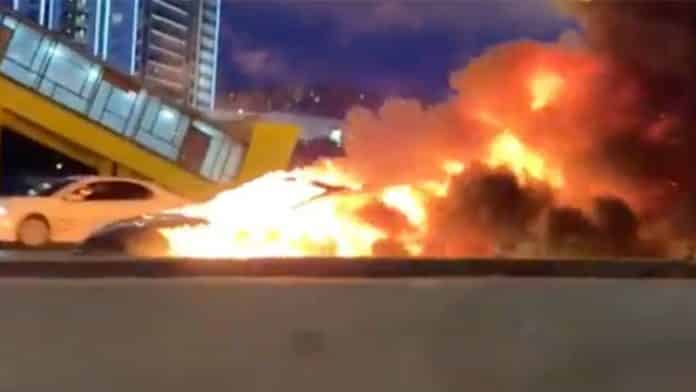 A Tesla Model 3 electric car, allegedly on Autopilot, crashed into the back of a tow truck parked on a Moscow motorway in Russia late on Saturday night, resulting in the vehicle catching fire and then exploding twice.

Videos of the Tesla Model 3 bursting into flames and later exploding were captured by incoming drivers who shared it on the social media.

Here is the video pic.twitter.com/JhtTwYl41J

Alexey Tretiyakov, a 41-year-old financial market expert and the head of Arikapital investment company, was driving the Tesla Model 3 and his two children were seated at the back of the car, Russian broadcaster Zvezda reported on Sunday.

According to reports, the car was on Autopilot. However, Tretiyakov admitted that he was holding the wheel on the ring road, known as MKAD, as the autocar maker recommends to do so to all drivers.

Although he was paying attention to the road, Tretiyakov says the car sensors pick up the static tow truck that was attending the vehicle. As a result, the car didn’t slow down and ended up hitting the broken-down tow truck, following which the Tesla caught fire.

“I was going along Moscow Ring road in the left lane with a speed of 100kph (62mph) and did not notice a parked GAZelle tow truck,” the businessman told reporters. “My Tesla Model 3 hit the tow truck with its left side and caught fire.”

“It was not on full-scale automatic control – in Model 3 there is the function ‘driver’s assistant’ only, so I was holding the wheel,” he adds.

Tretiyakov also said that he and his two children were wearing seat belts. “I needed help to get out of my car because one of my legs was broken,” he added.

According to police sources, the Tesla Model 3 was on Autopilot. “The Tesla was probably driving on Autopilot and couldn’t recognize the tow truck in front of it, after which it caught fire,” the police source says.

According to reports, Tretiyakov and his two children were able to escape from the vehicle before it caught fire. All the three were transferred to a hospital with Tretiyakov reportedly suffering a concussion and a leg fracture, while his children suffered non-life-threatening bruises.

Fortunately, nobody else was hurt during the incident despite heavy traffic around the burning vehicle.