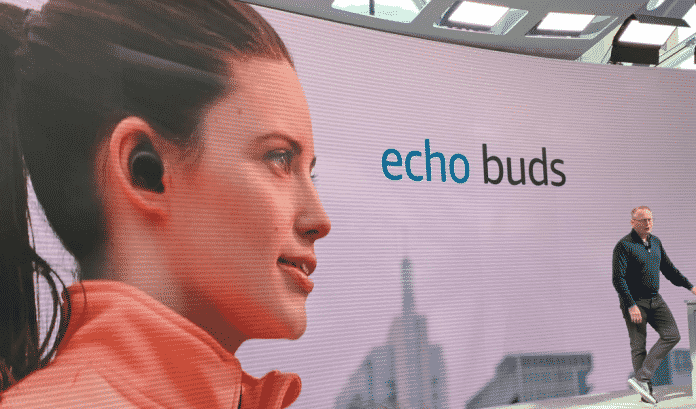 Amazon marked its entry into the headphones market by unveiling hands-free ‘Echo Earbuds’ with Bose’s Active Noise Reduction technology at its annual fall event on September 25th in Seattle.

Launched as a direct competitor to Apple’s AirPods and other wireless earbuds, Amazon’s Echo Buds are compatible with Amazon’s smart voice assistant, Alexa. Besides Alexa, the headphones are also compatible with any other smart voice assistant set up on the smartphone, such as Google Assistant or Apple’s Siri. The Echo Buds can be used not only at home but also outside of your house wherever you have an internet connection or tethered smartphone.

Amazon also has plans to introduce Alexa specific integrations with Echo Buds later this year that would allow you to use the headphones in Amazon-owned stores. For instance, one can ask Alexa whether the Whole Foods store that you are in has an item you want and direct you to the right aisle in the store to find them.

As far as hardware specifications are concerned, each earbud in the Echo Buds packs three microphones (for Alexa) and two balanced armature drivers for sound. There are built-in sensors that automatically pause playback when you take the Echo Buds off. There are also tap gestures such as double-tap to activate Bose noise reduction, tap and hold to access the default voice assistant (such as Google Assistant or Siri) on your phone, and more. The Echo Buds are IPX4-certified against splashes, sweat, or light rain.

An amazing feature of the new headphone is that it includes up to five hours of battery of a single charge, with up to 20 hours total including the battery case. However, ironically, the Echo Buds can be charged only via micro-USB and not USB Type-C.

The Echo Buds will cost $129.99 and will be available for purchase in the U.S. from October 30. Pre-orders for the headphones have already begun this Wednesday.