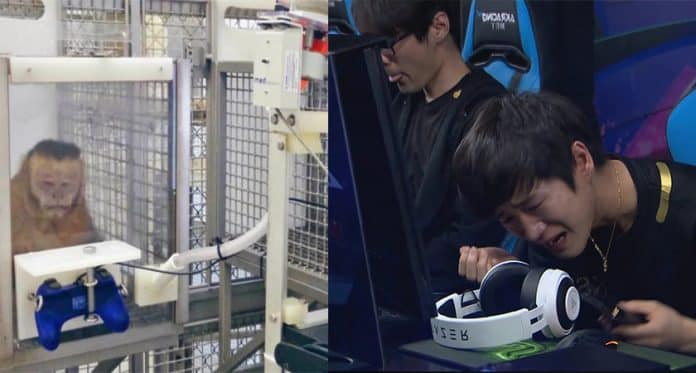 A research study by a psychology student at Georgia State University reveals that monkeys are better at problem-solving than humans. According to the study, monkeys were better in displaying a “cognitive flexibility” or problem-solving ability that the humans lacked due to their clinging to inefficient strategies for problem-solving.

“We are a unique species and have various ways in which we are exceptionally different from every other creature on the planet,” Julia Watzek, the study’s co-author and a graduate student in psychology at Georgia State University, said in a statement about the study. “But we’re also sometimes really dumb.”

For the test, 56 humans, 7 rhesus macaques, and 22 capuchin monkeys were selected to play a problem-solving video game. The simple game involved recognizing geometric shapes, where participants have presented four squares on a screen during each trial: one striped, one spotted, and two blank. They had to recognize and click a striped square and then a spotted square. On doing this, the game would display a blue triangle whereby clicking on the blue triangle would result in a win.

While monkeys got banana-flavored pellets for the win, humans got a simple audio cheer. “They kind of like playing computer games and getting banana pellets,” Watzek told Live Science.

Midway through the game, the researchers introduced a quick-and-dirty shortcut to win the game without following the traditional rules.

Surprisingly, only one person out of the 56 people tested took advantage of the shortcut when presented.

“I am really surprised that the humans, a sizable portion…just keep using the same strategy,” Watzek told Live Science.

In a related experiment, the same human participants were shown a video of someone else using the shortcut and were clearly told not to be afraid “to try something new.” Even after being given permission to break the rules, roughly 30% of participants still did not deviate from the original “two squares first” method.

The authors of the research paper suggest that humans instead of using their creative side of their brain are more likely to stick to one problem-solving strategy due to the educational practices employed in Western educational systems. This could lead to poor decision making and missed opportunities.

“If solution strategies are so entrenched that new information is ignored, they can lead us to make inefficient decisions and miss opportunities,” the authors wrote.

Humans can get stuck doing things "the way we've always done it" & miss out on easier solutions. Capuchins and rhesus monkeys don't. Find out more in our newest paper on cognitive shortcut use out in @SciReports! w/ @SezDoesScience & SF Brosnan @CogSciGSU https://t.co/uzYfH6yNfM pic.twitter.com/T7T40uA03g

According to Julia, the problem lies in our education system that concentrates on memorizing facts instead of encouraging improvisation: “To set ourselves up for good decision-making, sometimes that means changing available options.

“I’m not proposing to topple the entire Western education system, but it is interesting to think through ways in which we train our children to think a specific way and stay in the box and not outside of it. Just be mindful of it.”

Julia added, “There are good reasons for why we do what we do, but I think sometimes it can get us into a lot of trouble.

The research study was published in the journal Scientific Reports on September 13.