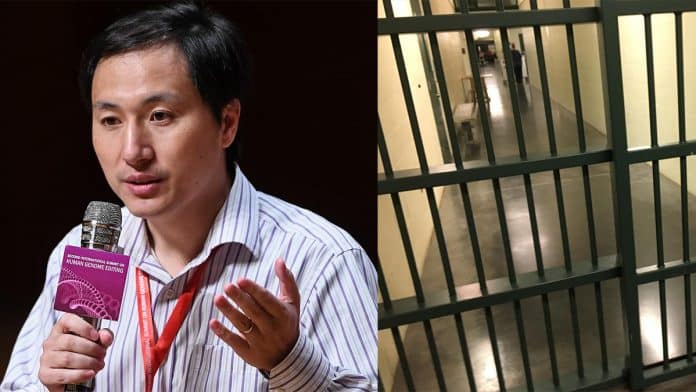 Chinese researcher He Jiankui and two of his colleagues were sentenced to prison by a court in Shenzhen on Monday for creating the world’s first genetically altered babies, reported China’s state-run Xinhua News Agency.

Jiankui, a former associate professor of the Southern University of Science and Technology, was sentenced to three years in prison and fined 3 million yuan ($430,000) for “illegally carrying out the human embryo gene-editing intended for reproduction.”

In November 2018, Jiankui shook the entire world when he revealed that he had created genetically modified humans, twins referred to as Lulu and Nana.

The team used the CRISPR gene-editing technique to modify the twins’ genomes with the intention of protecting the girls against HIV, the virus that causes AIDS. For the experiment, they recruited couples – husbands with HIV and wives without HIV. The modified embryos were then implanted into the mother for a full pregnancy term.

Jiankui’s research drew widespread criticism from many experts in the medical and scientific community around the world, including China. They considered the experiment to be extremely risky, immoral, and potentially even criminal in nature.

This led the provincial authorities to open up a criminal investigation against Jiankui’s work and halted the research. The trial proceedings were held behind closed doors and not made public as the case related to “personal privacy”.

While previously there were only reports of gene-edited twin girls, the Chinese authorities have acknowledged the birth of a third gene-edited child in the court statement.

According to the court documents, Jiankui and his team forged ethical review documents and used “impersonating and concealing tactics” on the patients and doctors to make them believe that they were part of an AIDS vaccine trial. Also, the gene-editing method employed by the team hasn’t been “verified for safety and effectiveness,” added the court documents.

Dr. William Hurlbut, a Stanford University bioethicist, whom Jiankui consulted on the embryo-editing experiment, said he felt sorry for the scientist, his wife and two young daughters.