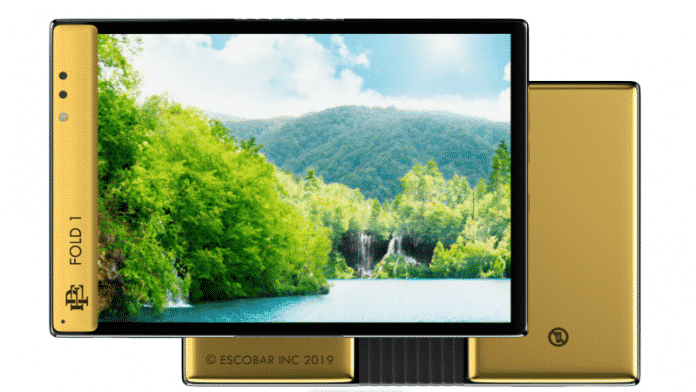 Conceptualized in the USA, the Escobar Fold 1 smartphone is being manufactured in Hong Kong.

“I have made one of the first foldable smartphones in the world. Thanks to effective production and no special deals with retailers, we have been able to keep costs low as compared to other manufacturers. The Escobar Fold 1 is the best smartphone in the world right now,” says Robert Escobar, Founder of Escobar Inc.

The smartphone features a 7.8-inch AMOLED FHD+ screen when folded and has a 4:3 aspect ratio. It runs an Octa-Core 2.8Ghz Qualcomm Snapdragon 8 CPU.

On the camera front, it features a dual-camera setup consisting of 16MP and 20MP sensors. It has a non-removable 4,000 mAh Lithium-Polymer battery and dual SIM support. It runs on Android 9.0 Pie and features a fingerprint sensor for biometric authorization.

According to Escobar, the Fold 1 screen does not break unlike the glass screens on Samsung phones. He claims that the phone is made from a “special plastic that is difficult to break” which still provides “the best resolution.”

Also, the smartphone is completely secure unlike those from Samsung and Apple, which are “100% open to all governments in the world,” says Escobar. The device also comes with a thin layer of metal that “blocks RFID and other communications.”

With the launch of Fold 1, Escobar wants to take on Apple with his smartphone.

“I have told many people that I would beat Apple and I will. I cut the networks and retailers, to sell to customers phones that can fold for only $349, phones which in stores cost thousands of dollars by Samsung and others. This is my goal, to beat Apple, and by doing it myself like I always have,” Escobar said.

He is also filing a $30 billion class-action lawsuit against Apple next year for scamming its users and selling worthless phones to consumers. Escobar wants Apple to “give some of their illegal profits back to the people”.

Currently, the Pablo Escobar Fold 1 is running an initial limited run of 100,000 phones, which Escobar Inc predicts will “sell out fast”.

The 128GB/6GB version of the smartphone costs $349, while the 512GB/8GB variant retails at $499. These prices include worldwide free shipping as well as a free phone case.

The device comes unlocked and works with all sim cards and networks around the globe. You can buy the smartphone only at www.escobarinc.com/Fold1.