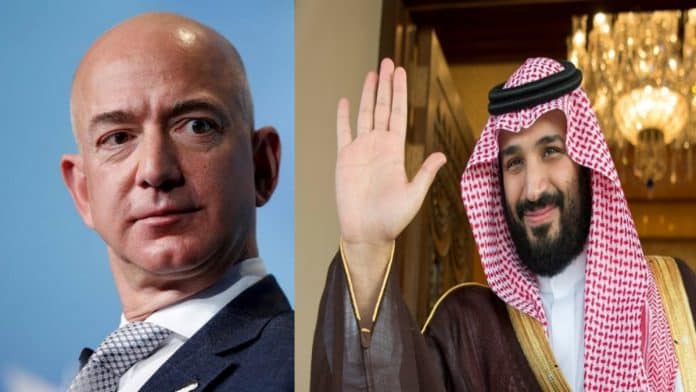 Amazon founder and boss Jeff Bezos’s mobile phone was hacked after receiving a WhatsApp message from the personal account of Saudi Crown Prince Mohammed Bin Salman, according to a new report from The Guardian which cited multiple sources familiar with the investigation.

According to The Guardian, Bezos reportedly was having a friendly texting exchange with the Saudi Crown Prince on May 1, 2018, when a malicious video file was sent from Salman’s phone.

When Bezos opened the file, it compromised his phone and extracted large amounts of data within hours.

Bezos was suspected of being hacked after the U.S. gossip magazine, the National Enquirer, published intimate details about his private life in January 2019.

The story published by the National Enquirer shared information of Bezos’ involvement in an extramarital affair with a former Fox TV anchor, Lauren Sanchez, that relied, in part, on intimate text messages sent by Bezos.

In February 2019, Bezos accused the National Enquirer of “extortion and blackmail” and threats of publishing more “intimate photos and text messages” unless he publicly confirmed that there was no political motivation or outside force behind the tabloid’s coverage.

In March 2019, Gavin De Becker, a private security specialist who was employed by Bezos for investigation on his phone, said that the Saudi government was behind the hack.

He claimed that the Saudi government had access to Amazon CEO’s phone and his private information before the Enquirer exposed the affair. However, he did not have any direct evidence to back up his claims, which he said came from “our investigators and several experts”.

According to De Becker, the Enquirer’s business relationship with the Saudis, as well as tough coverage of the murder of Jamal Khashoggi, a critic of the Saudi regime and a prominent journalist for The Washington Post owned by Amazon, as the reasons behind the Saudi Crown Prince’s involvement in the hack.

The Saudi Embassy denied any involvement of the government in the hacking of Bezos’s phone.

“Recent media reports that suggest the Kingdom is behind a hacking of Mr. Jeff Bezos’ phone are absurd,” the Saudi Embassy said on Twitter. “We call for an investigation on these claims so that we can have all the facts out.”

Recent media reports that suggest the Kingdom is behind a hacking of Mr. Jeff Bezos' phone are absurd. We call for an investigation on these claims so that we can have all the facts out.

A lawyer for Bezos who didn’t share any information told The Guardian: “I have no comment on this except to say that Mr. Bezos is cooperating with investigations.”