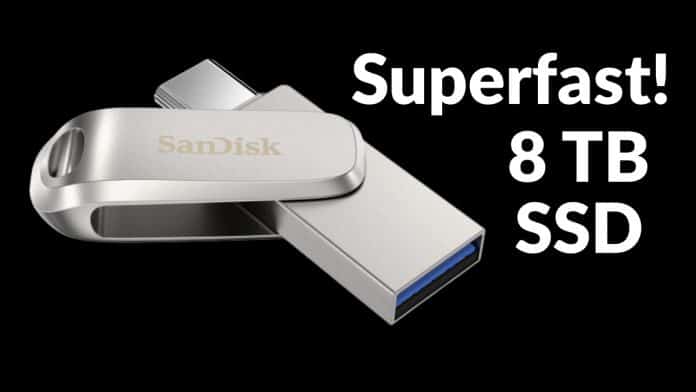 According to the company, the external SSD drive is “the world’s highest capacity, pocket-sized, portable SSD prototype featuring a SuperSpeed USB 20Gbps interface.” The device has been created for users who want to create their digital collections without restrictions and always have them handy.

“Consumers are generating more content than ever and require more advanced solutions to help them capture, access, share and manage it all. Our top priority is to empower people by giving them complete control of their content, so they have peace of mind that it’s reliably stored and at their fingertips when and where they need it,” said David Ellis, vice president, product marketing, Western Digital.

Thanks to the SuperSpeed ??USB support, it will be able to achieve data transfer speeds of up to 20Gbps. With 8TB of storage, it can hold 1300+ hours of 4K video, among other things. Since this SSD is just a prototype, we won’t find one in stores anytime soon.

Besides showing off the prototype SSD, the company is launching the all new 1TB SanDisk Ultra Dual Drive Luxe USB Type-C drive. This all-metal storage solution to fit 1TB of data on keychains features both USB Type-C and A connectors and can be plugged into smartphones or even tablets at any time.

This drive allows users to capture more photos and videos, and easily transfer content between smartphones, tablets, laptops, and computers. Since it is USB 3.1 Gen 1, it won’t give fastest speeds, but it can still transfer files at a very respectable 150MB/s read speeds.

The Dual Drive Luxe 1TB model will cost $249.99 and should arrive at the end of first quarter. While the base 32GB model starts at $10.99, there are lot of other options available too. Those interested, can pre-order the flash drive here now.

Meanwhile, Western Digital’s WD_Black brand has something for gamers too. There’s a new WD_Black P50 Game Drive SSD, which according to the company is the industry’s first game drive to feature a SuperSpeed USB 20Gbps interface.

Another fascinating device launched by Western Digital is a new SanDisk ibi Photo Management device that offers consumers local storage that works like a personal cloud for photos and videos. With 1TB of internal storage, it can store up to 250,000 photos or 100 hours of video. It is priced at $129.99 and is now available for sale.