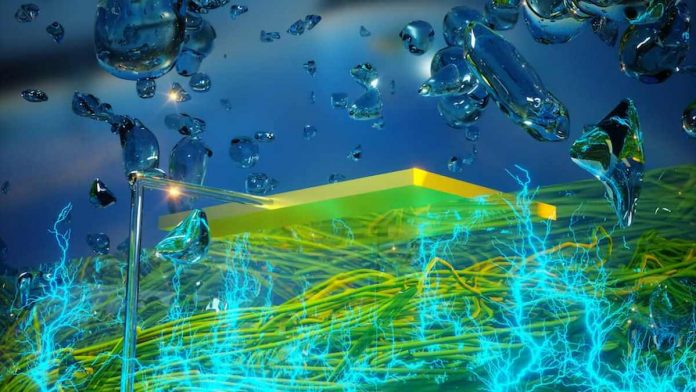 Scientists at the University of Massachusetts Amherst have developed a device that is capable of generating electricity from moisture in the air by using a natural bacteria-derived protein.

According to the researchers, this technology could have significant effects for the future of renewable energy, climate change, and health.

As reported in Nature (“Power generation from ambient humidity using protein nanowires”), Microbiologist Derek Lovley and Electrical Engineer Jun Yao from the University of Massachusetts Amherst are calling the device as “Air-gen” (or air-powered generator). As the name suggests, the device can create electricity right out of air!

The device is made using ultra-small electrically conductive protein wires produced by a microbe called Geobacter, which Lovely discovered in the mud of the Potomac River more than 30 years ago.

The role of the Air-gen is to connect the protein nanowires to the electrodes in such a way that it generates small electrical current utilizing moisture in the air.

Lovley describes the device as “the most amazing and exciting application of protein nanowires yet”.

The device, the scientists said, is not just a clean source of energy, but also renewable and a low-cost solution for energy generation.

According to Lovley, the Air-gen does not require sunlight or wind, and “it even works indoors.”

This is how Science Alert explained the design of the device:

The Air-gen consists of a thin film of the protein nanowires measuring just 7 micrometres thick, positioned between two electrodes, but also exposed to the air.

Because of that exposure, the nanowire film is able to absorb water vapour that exists in the atmosphere, enabling the device to generate a continuous electrical current conducted between the two electrodes.

The scientists are hoping that the current generation of Air-gen devices are able to power small electronics.

“The ultimate goal is to make large-scale systems. For example, the technology might be incorporated into wall paint that could help power your home. Or, we may develop stand-alone air-powered generators that supply electricity off the grid,” Yao said.

“Once we get to an industrial scale for wire production, I fully expect that we can make large systems that will make a major contribution to sustainable energy production,” he added.

The scientists recently engineered a new microbial strain to mass-produce the protein wires at a fast pace and a cheaper cost.