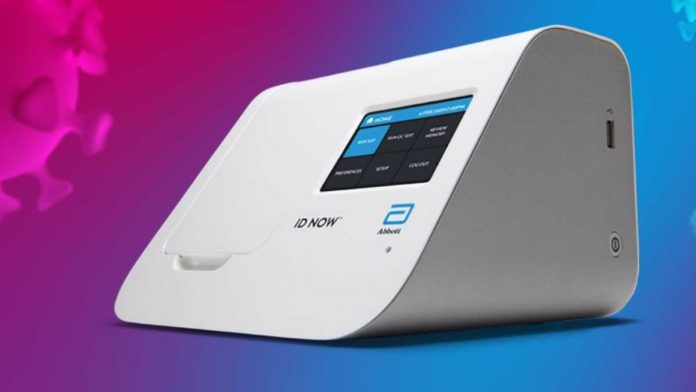 Abbott Laboratories has launched a new “ID NOW COVID-19” test that can detect positive coronavirus cases in less than five minutes on the spot without the need of a lab.

The U.S. Food and Drug Administration (FDA) on Friday issued Emergency Use Authorization (EUA) to Abbott’s ID NOW COVID-19 making the test available to healthcare providers as early as next week.

This test can be used in a wide range of healthcare settings such as physicians’ offices, urgent care clinics, and hospital emergency departments.

Abbott plans to ramp up manufacturing to deliver 50,000 tests per day in the U.S. starting next week. The test can detect positive results in as little as five minutes, while negative results take about 13 minutes.

It will run on Abbott’s “ID NOW”, a molecular point-of-care testing platform widely used to diagnose patients who are sick with things like influenza, strep throat, and respiratory syncytial virus. The ID NOW system less than 7 pounds, which is small, lightweight and portable.

“The COVID-19 pandemic will be fought on multiple fronts, and a portable molecular test that offers results in minutes adds to the broad range of diagnostic solutions needed to combat this virus,” said Robert B. Ford, president, and chief operating officer, Abbott.

“With rapid testing on ID NOW, healthcare providers can perform molecular point-of-care testing outside the traditional four walls of a hospital in outbreak hotspots. Because of its small size, it can be used in more non-traditional places where people can have their results in a matter of minutes, bringing an alternate testing technology to combat the novel coronavirus.”

Abbott said it working with the U.S. government to deploy tests to areas where they can have the greatest impact, such as emergency rooms.

This is not the first Abbott system to make it to urgent care facilities. Last week, Abbott’s m2000 RealTime system received U.S. Food and Drug Administration approval. With the two systems combined, Abbott has ambitious plans of producing at least 5 million tests a month for the novel virus in April.

For those unaware, the U.S. has overtaken China and Italy with the highest number of reported coronavirus cases crossing over 124,000 and more than 2,100 deaths.

It should be noted that the ”ID NOW COVID-19 EUA” is not FDA cleared or approved, which means that it can only be used by authorised laboratories and patient care settings.