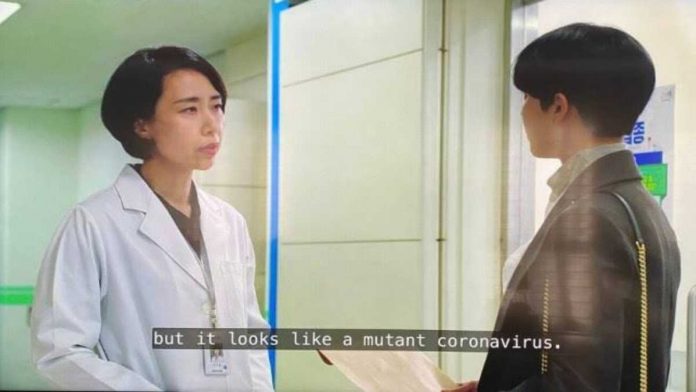 If you thought how could the 2011 American medical action thriller film ‘Contagion’ be so freakily similar to the current Coronavirus (COVID-19) pandemic situation, then what I am going to say will give you goosebumps.

A viral clip of the 2018 Netflix South Korean TV Series ‘My Secret, Terius’ is freaking out users on the internet, as the clip shows an uncanny resemblance to the present global COVID-19 crisis happening around the world.

The synopsis of the South Korean TV show on Netflix reads, “A secret agent who detaches himself from the world after a failed operation tries to unravel the mystery behind a neighbour’s death.”

It is the 10th episode of this South Korean TV series Season 1 that has got fans all over the world freaking out. The clip which is approximately 53 minutes into the 10th episode, shows a man telling his partner that she should stay at home and avoid stepping out.

The scene then shifts to hospital premises that shows a doctor handing over a file to another character and saying: “We must do more research, but it looks like a mutant coronavirus.”

“The coronavirus attacks the respiratory system. During the 2015 MERS epidemic, the mortality rate was over 20 percent.”

The agent then asks: “But that’s not serious enough to be used as a weapon. Am I wrong?”

The doctor says: “Like I said, this is a mutant virus. Someone tweaked it to increase the mortality rate to 90 percent. The coronavirus attacks the respiratory system. What’s more serious is that the coronavirus has an incubation period of two to 14 days.”

She then adds: “This virus was manipulated to attack the lungs directly within just five minutes of being exposed.”

When questioned if there’s a cure, she responds: “There’s no cure or vaccine available at the moment. They’ re hard to develop.”

A later scene even shows a class of children being taught how to effectively wash their hands to avoid contracting the virus.

Below is the video that’s going viral:

In the drama My Secret Terrius that was released in 2018 (UNIQ's sungjoo was among the cast) they talked in details about the corona virus…. I had goosebumps… pic.twitter.com/nuQ3UYZlMR

The TV series which began trending on social media this week have seen netizens expressing shock over the coincidence, while some even saying that the Korean drama had warned about the virus.

This is a scene from a Korean series : “MY SECRET TERRIUS, season 1, episode 10.
And they predicted CoronaVirus in 2018!
You can go on Netflix and look for yourself pic.twitter.com/uSQUPrPcZg

“This is a scene from a Korean series : “MY SECRET TERRIUS, season 1, episode 10.
And they predicted CoronaVirus in 2018! You can go on Netflix and look for yourself, said one Twitter user.

“The describe it as a mutant virus that attacks the respiratory organs. Same as covid19 and the show is called “my secret terrius” terrius meaning ruler of people. Considering most of the world is on lockdown by government orders do you not find that odd?” wrote another freaked out user.

While a third fan wrote: “Just gonna leave this here but I am massively spooked. This series My Secret Terrius is on Netflix but came out 2 years ago and talks about the coronavirus we’re going through rn…”

Another added: “Conversation about Coronavirus on a 2018 Netflix series called ‘My Secret Terrius.’ Two years ago. What’s going on!?”

While a fifth one wrote: “Why’s no one talking about this TV show that came in 2018 ‘My secret Terrius’ that talks about the s*** we’re going through rn.”

Currently, the show is streaming on Netflix and can be viewed by users in the U.S. and UK.

Most of the countries around the world have announced lockdown to curb the disease, as the coronavirus pandemic has affected over 537,000 people globally and killed over 24,000 people till date.