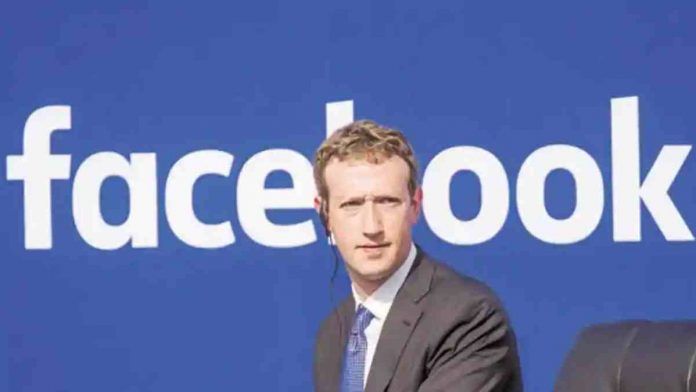 A Facebook software engineer in California on Monday publicly resigned over the company’s inaction against President Donald Trump’s controversial posts about the U.S. protests following the death of George Floyd, an African-American man, in police custody in Minneapolis.

Timothy J. Aveni, a junior software engineer on Facebook’s team dedicated to fighting misinformation, announced on LinkedIn and Facebook that he was leaving the company in protest, saying that the company is “on the wrong side of history.”

Hundreds of Facebook employees staged a “virtual walkout” on June 1 by walking away from their work-from-home desks complaining that the company should have acted against Trump’s posts containing the phrase “when the looting starts, the shooting starts”.

The social media giant is facing criticism for being unable to impose its standard content policies against Trump’s above post that has been seen as encouraging violence against those protesting police racism.

Facebook CEO Mark Zuckerberg said that while he finds the remarks “deeply offensive,” they did not violate company policy against incitements to violence.

Aveni cited Facebook’s response to Trump’s post as a reason for his exit from the company and said he is on the lookout for a new job.

“I cannot stand by Facebook’s continued refusal to act on the president’s bigoted messages aimed at radicalizing the American public. I’m scared for my country, and I’m watching my company do nothing to challenge the increasingly dangerous status quo,” Aveni wrote in a public post on LinkedIn.

In a detailed post on Facebook, Aveni criticised the social media for not being able to apply its rules evenly. 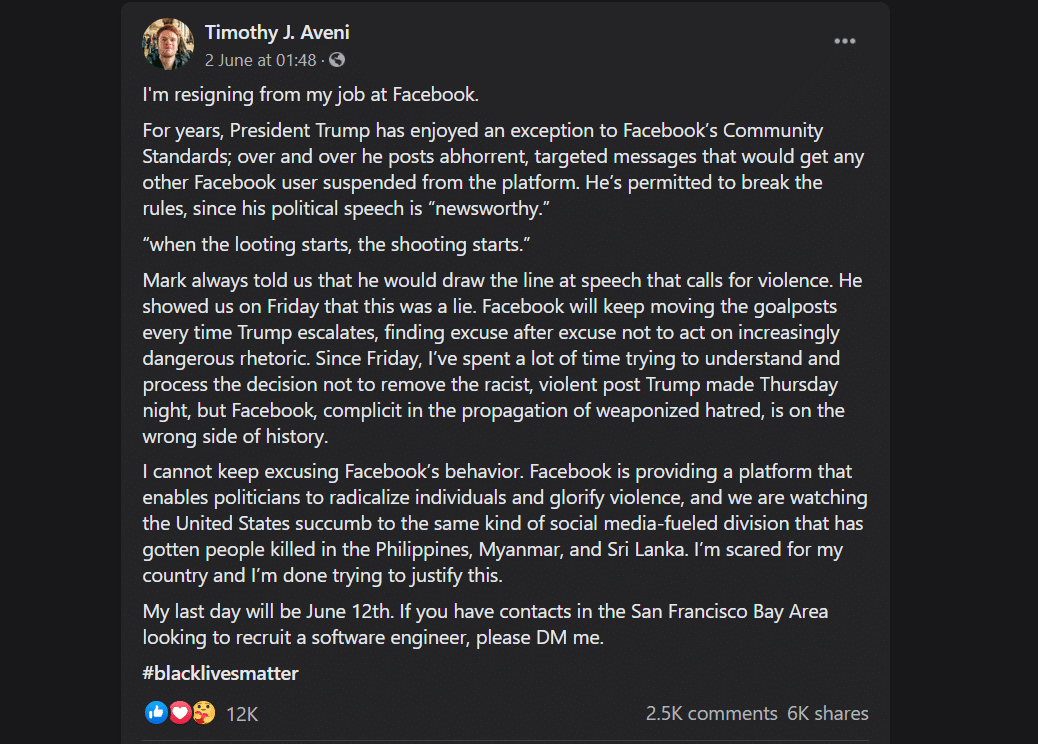 “I’m resigning from my job at Facebook. For years, President Trump has enjoyed an exception to Facebook’s Community Standards; over and over he posts abhorrent, targeted messages that would get any other Facebook user suspended from the platform. He’s permitted to break the rules, since his political speech is ‘newsworthy’,” he wrote.

“Mark always told us that he would draw the line at speech that calls for violence. He showed us on Friday that this was a lie. Facebook will keep moving the goalposts every time Trump, finding excuse after excuse not to act on increasingly dangerous rhetoric,” Aveni said.

“Since Friday, I’ve spent a lot of time trying to understand and process the decision not to remove the racist, violent post Trump made Thursday night, but Facebook, complicit in the propagation of weaponized hatred, is on the wrong side of history.”

He added: “I cannot keep excusing Facebook’s behavior. Facebook is providing a platform that enables politicians to radicalize individuals and glorify violence, and we are watching the United States succumb to the same kind of social media-fueled division that has gotten people killed in the Philippines, Myanmar, and Sri Lanka. I’m scared for my country and I’m done trying to justify this.”

Zuckerberg and Facebook COO Sheryl Sandberg on Monday night had a Zoom call with the leaders of three civil rights groups — Vanita Gupta of the Leadership Conference on Civil and Human Rights, Rashad Robinson from Color of Change and Sherrilyn Ifill from the NAACP Legal Defense and Education Fund. They tried to explain the company’s decision to the trio, but were unsuccessful in doing so.

“We are disappointed and stunned by Mark’s incomprehensible explanations for allowing the Trump posts to remain up. He did not demonstrate understanding of historic or modern-day voter suppression and he refuses to acknowledge how Facebook is facilitating Trump’s call for violence against protesters,” the trio said in a statement.

“Mark is setting a very dangerous precedent for other voices who would say similar harmful things on Facebook,” they added.

Meanwhile, Facebook spokeswoman Liz Bourgeois who declined to comment on Aveni’s resignation said, “We recognize the pain many of our people are feeling right now, especially our Black community. We encourage employees to speak openly when they disagree with leadership. As we face additional difficult decisions around content ahead, we’ll continue seeking their honest feedback.”

While Facebook declined to act on Trump’s controversial post, social media’s competitor Twitter affixed a warning label to his tweet stating that it “glorified violence” but was left up as a public interest exception, with minimum options for interactions and distribution.