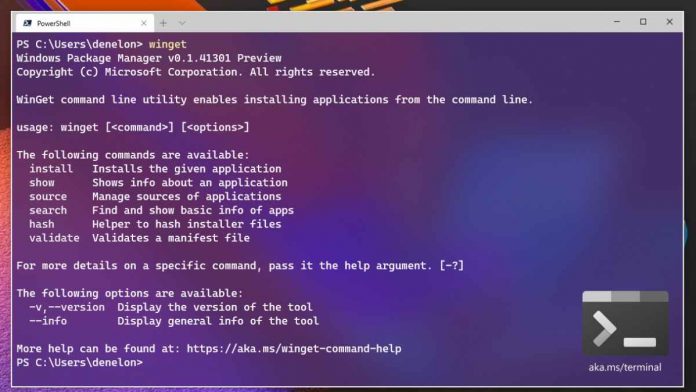 An open-source project developer finally got credit after Microsoft acknowledged that the recently released Windows 10 Package Manager (WinGet) was inspired by the developer’s app.

WinGet for Windows 10 was released by Microsoft last month as part of its Build 2020 announcements. This new set of software tools makes installation, updating, and locating of software to install much easier for developers.

As soon as WinGet was released, the tool became a topic of controversy after Keivan Beigi, who created a similar popular package manager called AppGet, accused Microsoft of stealing his idea.

Last week, Beigi had provided a detailed account of how Microsoft’s Andrew Clinick, who works with the company’s app model, reached out to him last year showing interest in his work and also interviewed him for a prospective job role. However, after the interview, Microsoft went silent only to ghost him six months later with the release of WinGet.

“When I finally saw the announcement and the GitHub repositories, I was shocked? Upset? I wasn’t even sure what I was looking at,” writes Beigi.

He claims he was surprised to see that “the core mechanics, terminology, the manifest format and structure, even the package repository’s folder structure, are very inspired by AppGet”.

Beigi said he was fine with Microsoft copying his open-source Windows package manager but was deeply hurt when the Redmond giant made no mention of him or AppGet while unveiling WinGet.

“The part that hurts the most was the announcement. AppGet, which is objectively where most ideas for WinGet came from, was only mentioned as another package manager that just happened to exist; While other package managers that WinGet shares very little with were mentioned and explained much more deliberately,” Beigi said.

“I’m not even upset they copied me. To me, that’s a validation of how sound my idea was. What upsets me is how no credit was given.”

Meanwhile, Beigi has decided to stop working on AppGet. He added that there is no point in competing against Microsoft and fragmenting the ecosystem will not benefit anyone.

“I’m no longer going to be developing AppGet. The client and backend services will go into maintenance mode immediately until August 1, 2020, at which point they’ll be shut down permanently.”

Responding to Beigi’s claims, Clinick admitted in a not-so apology post that Microsoft should have given him proper credit.

“Our goal is to provide a great product to our customers and community where everyone can contribute and receive recognition,” writes Clinick

“The last thing that we want to do is alienate anyone in the process. That is why we are building it on GitHub in the open where everyone can contribute. Over the past couple of days we’ve listened and learned from our community and clearly we did not live up to this goal. More specifically, we failed to live up to this with Keivan and AppGet. This was the last thing that we wanted.”

Adding further, Clinick writes, “I want to take this opportunity to thank Keivan for his thoughtful approach to AppGet and working with us. We will be open-sourcing our service code into our WinGet repository on GitHub so that we can work together with Keivan and others to enable a better WinGet repository listing service.”