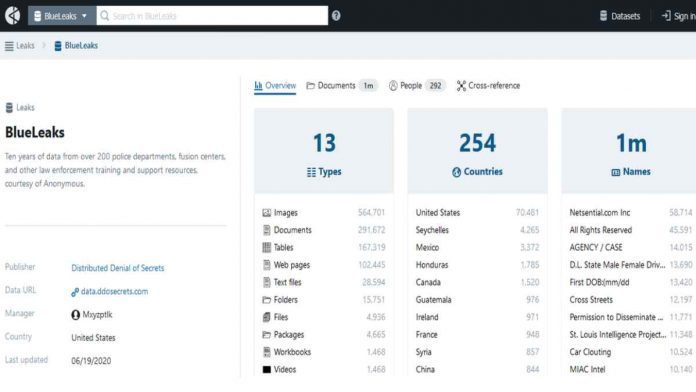 Social media platform Twitter on Tuesday shut down and banned the account of Wikileaks-style publisher Distributed Denial of Secrets (or DDoSecrets).

For those unaware, DDoSecrets, a hacktivist group that is often described as an alternative to WikiLeaks, had leaked nearly 269GB of data trove called ‘BlueLeaks’ last week, which belonged to more than 200 U.S. police departments, fusion centers, and other law enforcement training and support resources.

The data trove contained “highly sensitive information such as ACH routing numbers, international bank account numbers (IBANs), and other financial data as well as personally identifiable information (PII) and images of suspects listed in Requests for Information (RFIs) and other law enforcement and government agency reports,” according to the security blog KrebsOnSecurity.

Emma Best, the founder of DDoSecrets, on Tuesday, confirmed the shutting down of the official account of the DDoSecrets collective, which is made of activists, journalists, and technologists.

The entire @DDoSecrets domain is being blocked by Twitter. If you attempt to tweet any link to ddosecrets[dot]com, the tweet will fail and Twitter will not send it, flagging it as “potentially harmful”. This is active censorship of journalism. #BlueLeaks pic.twitter.com/krbF5VmgRE

“We’ve worked with many national outlets on various projects, and our previous releases had been lauded as a ‘mini-Panama papers,’ among others things so it’s disheartening to see Twitter side with the police against researchers, journalists, and the public,” Emma told Motherboard in an online chat.

According to a ‘Distribution of hacked material policy’ dated March 2019, Twitter prohibits the use of their services “to directly distribute content obtained through hacking that contains private information, may put people in physical harm or danger, or contains trade secrets.”

In the last few years, Twitter has suspended some accounts that used their platform to distribute hacked materials, including personal information. For instance, the social media platform banned the account of the hacking group, The Dark Overlord after it leaked addresses and phone numbers of several well-known clients of a Beverly Hills-based health care provider.

While WikiLeaks in the past has distributed leaked or hacked materials on Twitter, the account of the hacking collective has never banned from the social networking service.