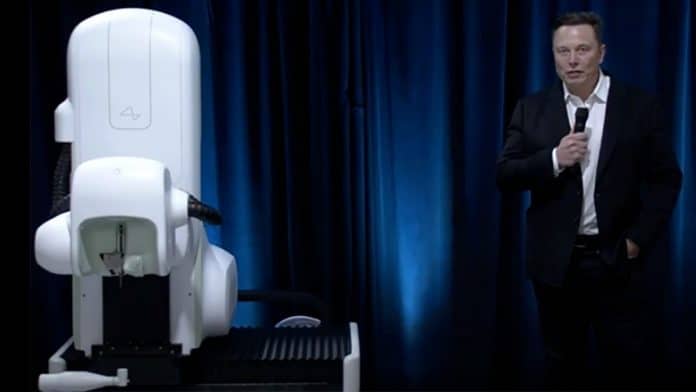 As part of Neuralink’s live event demo, the billionaire entrepreneur showed off a pig named Gertrude who had a coin-sized computer chip surgically implanted into its brain for two months.

“We have a healthy and happy pig, initially shy but obviously high energy and, you know, kind of loving life, and she’s had the implant for two months,” Musk said in his presentation.

“I think it’s going to blow your minds. It’s like a Fitbit in your skull with tiny wires,” he told viewers.

“The neurons are like wiring, and you sort of need an electronic thing to solve an electronic problem,” Musk said speaking about the potential for the technology to address brain injuries and other disorders.

The new chip is much smaller and does not require the visible ear device. With the help of a sophisticated robot, flexible threads or wires smaller than a human hair are implanted in brain areas responsible for motor and sensory functions under local anaesthesia.

Musk also mentioned that the chip is removable. He demonstrated another pig, Dorothy, who he claimed had one of the devices implanted and consequently removed.

“What Dorothy illustrates is that you can put in the Neuralink, remove it, and be healthy, happy, and indistinguishable from a normal pig.”

Co-founded by Musk in 2016, San Francisco-based Neuralink aims to implant wireless brain-computer chips that include thousands of electrodes in the most complex human organ to help cure neurological conditions like Alzheimer’s, dementia and spinal cord injuries.

Ultimately, it could also fuse humankind with artificial intelligence.

“An implantable device can actually solve these problems,” Musk said in his webcast, citing ailments such as memory loss, hearing loss, depression and insomnia.

He also mentioned that the aim of sharing the development at the event was not to raise money but to try and convince great people to come and work at Neuralink.

The Tesla CEO also announced that Neuralink was awarded a “breakthrough device authorisation” by the U.S. Food and Drug Administration (FDA) in July, which can help accelerate the regulatory process for products “that provide for more effective treatment or diagnosis of life-threatening or irreversibly debilitating diseases or conditions.”

The ultimate goal for Neuralink is a “full brain-machine interface” that will accomplish a “symbiosis with artificial intelligence.”