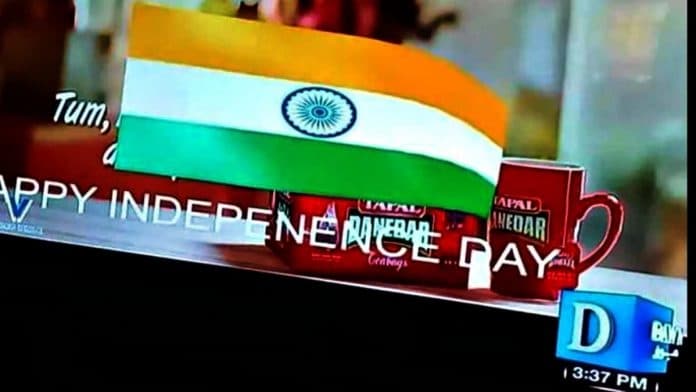 Pakistan TV news channel, Dawn, was reportedly hacked on Sunday with an Indian tricolour waving on the channel’s screen while it was running an advertisement.

Besides the Indian tricolour flag, it also displayed a ‘Happy Independence Day’ message on the screen.

According to media reports, the message appeared on the news channel in Pakistan at 3.30 pm on August 2. It is known that both the flag and the message remained on the screen for a while before it disappeared.

Soon after, videos and photos of this incident went viral on social media attracting a huge hue and cry with clips of the broadcast being circulated on Twitter.

What the hell Dawn News ? Get out from Pakistan @Dawn_News
– Love Pakistan or Leave Pakistan pic.twitter.com/8Wj9tyalnw

From dawn leaks to indian advertisement #DawnNews is on some other agenda. This chanel usually float anti state content in their news. pic.twitter.com/5DVmEX2wGr

Just In: Dawn Channel was hacked and started broadcasting Tiranga!!

Following the incident, Dawn News put out a tweet in Urdu. The tweet read, ” On August 2, Dawn News was broadcasting as usual when suddenly the Indian flag and the text of Happy Independence Day appeared on the commercial running on the screen. It remained for some time and then disappeared,” the company said, adding that “it would be premature to comment on the matter.”

The Dawn administration said that it has ordered an immediate investigation into the matter and will inform its viewers as soon as it reaches a final conclusion.