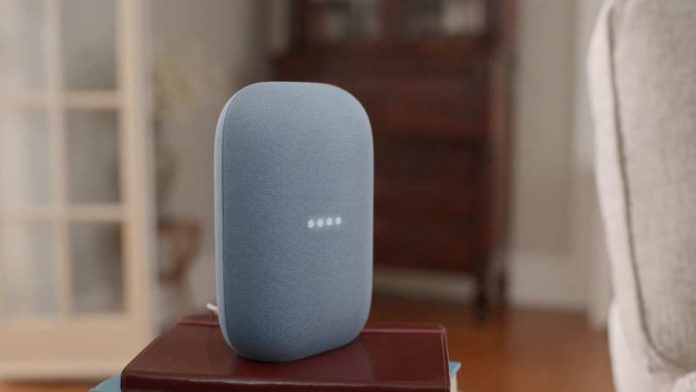 For those unaware, Google Nest, previously named Google Home, is a line of smart speakers developed by Google under the Google Nest brand. Nest Audio is the successor to the mid-range Google Home smart speaker that was launched in 2016.

The newly introduced Nest Audio focuses on music quality and has “top-of-the-range sound quality”, claims Google. In comparison to the original Google Home, the smart speaker produces 50% more bass and 75% more volume. Moreover, it can adjust its sound depending on its surroundings.

With its woofer, tweeter, and tuning software, crisp vocals and powerful bass, #NestAudio delivers your music the way it should sound.#LaunchNightIn https://t.co/E75uqzHuGv pic.twitter.com/locTr9fB1D

The new Nest Audio supports room-filling sounds and has two speaker units below its shell that can be paired for stereo sounds.

It also sports a built-in 19mm tweeter for consistent high-frequency coverage and clear vocals and a 75mm mid-woofer that brings the bass along with three far-field microphones and 2-stage mice mute switch. Additionally, the power adapter delivers 30W of power.

Further, the smart speaker has Google Assistant built-in and comes with support for smart home devices. It can connect to a wide range of streaming music services, which includes Spotify, YouTube Music, Pandora, and more.

It also features a Media EQ function that will automatically tune the sound of the media you are listening to music, podcasts, audiobooks or even a response from Google Assistant. In addition, Ambient IQ lets Nest Audio also adjust the volume of Assistant, news, podcasts, and audiobooks based on the background noise in your home.

The Nest Audio has a really slim profile and features an all-new rectangular design. It comes wrapped with a fabric exterior that’s made of 70 percent recycled plastics. It is powered by a 1.8GHz Quad-Core Cortex-A53 processor and features a ‘High-performance’ ML hardware engine.

On the connectivity front, it supports Dual-band Wi-Fi (2.4GHz and 5GHz), Bluetooth 5.0, and has a built-in Chromecast. The new Nest Audio also supports touch controls, which means the speaker can be either controlled using voice or the touch-sensitive controls on the top.

The new Nest Audio will be available in five colors including the all-new Sage, Sand, Sky, Chalk, and Charcoal. It will retail for $99.99 online at the Google Store and other retailers in the U.S., Canada, and India starting October 5th. You can find it across offline retailers including Target, Best Buy, and more in 21 countries starting October 15th.