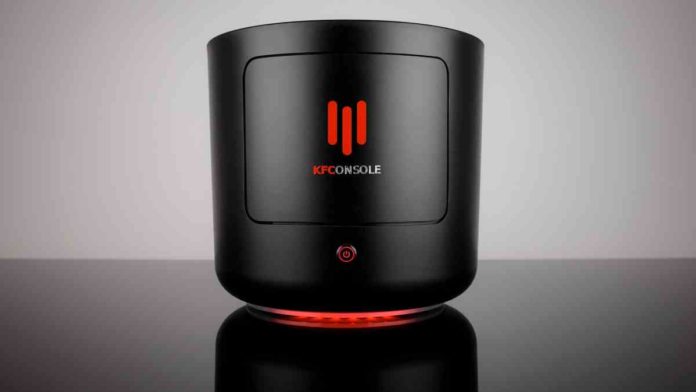 Fast-food giant KFC (formerly known as Kentucky Fried Chicken) has introduced its own video gaming console with a built-in food tray that will keep your pre-fried chicken warm while you play video games.

The chicken giant has built the video gaming console called the ‘KFConsole’ in partnership with the Taiwanese computer hardware manufacturer, Cooler Master. The device has got what KFC Gaming describes as the “World First Built-In Chicken Chamber”, which utilises the system’s natural heat and airflow system to keep the food hot.

Designed like a chicken bucket, the console is black in color and contains an ejectable tray for your pre-fried chicken. There is a power button below the tray that glows red. Further, at the bottom, there is a ring that also glows red.

See it for yourself. Find out more about the new #KFConsole @CoolerMaster: https://t.co/omZWuIhBG8 pic.twitter.com/6n5panSJIs

Based on Intel’s NUC 9 Extreme Compute Element, the PC is housed in a custom Cooler Master NC100 chassis to keep space down and drive performance. Further, the Asus powered graphics keeps tearing and frame drop a thing of the past. The KFConsole has got a first of its kind hot swappable GPU slot, ensuring that it stays the most powerful console for several years.

The machine uses two Seagate BarraCuda 1 TB PCIe NVMe SSDs, which can boot games up in seconds and instantly access data while loading games. Further, the PC is fully equipped for VR (Virtual Reality), Ray Tracing technology, and 4K gaming. The console also supports up to 240fps for ALL games and 240Hz output on 4K display monitors and 4K TVs.

Currently, there is no information on the price and release date of the KFConsole. Keep watching this space for more updates on this interesting combination of chicken and video games console!