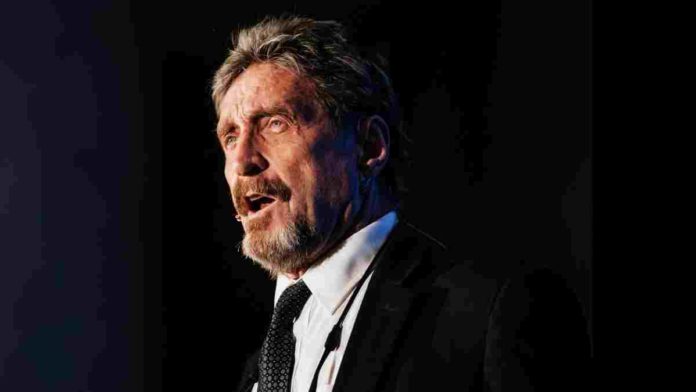 John David McAfee, the founder of the McAfee antivirus software company, on Friday, was charged with conspiracy to commit fraud and money-laundering in the U.S. from two cryptocurrency schemes that he ran on Twitter.

According to federal prosecutors, McAfee and his executive advisor-cum-bodyguard Jimmy Gale Watson Jr. exploited McAfee’s large Twitter following to artificially inflate prices of “altcoins” through a so-called pump-and-dump schemes. They earned nearly $2 million by urging Twitter followers to invest in cryptocurrencies like Reddcoin and Dogecoin. They also landed some £8m ($11m) from various fledgling cryptocurrency organisations as payments to promote the start-ups.

“As alleged, McAfee and Watson exploited a widely used social media platform and enthusiasm among investors in the emerging cryptocurrency market to make millions through lies and deception. The defendants allegedly used McAfee’s Twitter account to publish messages to hundreds of thousands of his Twitter followers touting various cryptocurrencies through false and misleading statements to conceal their true, self-interested motives,” Manhattan U.S. Attorney Audrey Strauss said in a release.

“McAfee, Watson, and other members of McAfee’s cryptocurrency team allegedly raked in more than $13 million from investors they victimized with their fraudulent schemes. Investors should be wary of social media endorsements of investment opportunities.”

The duo allegedly ran their scheme between December 2017 to October 2018 during which McAfee and Watson, and other members of the McAfee Team, hyped up cryptocurrencies like Reddcoin and Dogecoin in which McAfee held a stake and then sold them for a profit after the price of these cryptocurrencies went up following his endorsement.

They also allegedly used Twitter to promote the sale of digital tokens on behalf of ICO issuers without disclosing to investors the compensation they were receiving to tout these securities on behalf of the “initial coin offerings” (“ICOs”), and also took a cut of ICOs he promoted to followers.

A lawyer for McAfee could not be identified at this stage for comment. McAfee is currently being detained in Spain following his arrest there on tax evasion charges, the Justice Department said.

On the other hand, Watson was detained on Thursday night in Texas, the department added. “Jimmy Watson is a decorated veteran and former Navy Seal. He fought for other people’s rights and liberties, and he is entitled to and looks forward to his day in court to exercise some of those very rights,” Watson’s lawyer Arnold Spencer said in a statement.