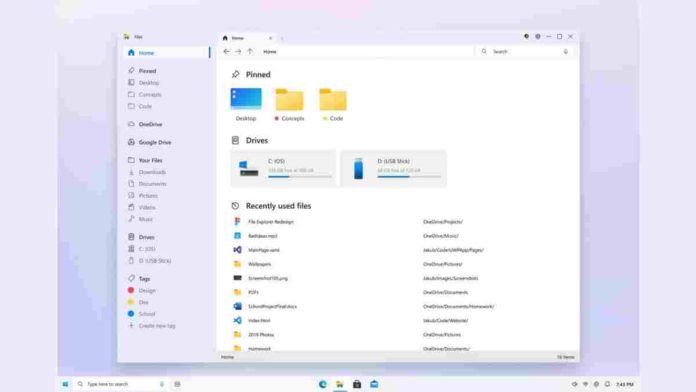 Microsoft enthusiasts creating their very own concepts imagining Windows 10 is nothing new, and this time it’s the turn of Windows File Explorer.

The concept spotted by Neowin has been reimagined by a Reddit user Alur2020 who has enhanced Windows File Explorer to increase productivity as well as provide a new and sleek look.

For those unaware, Windows File Explorer is a file manager application that is included with releases of the Microsoft Windows operating system from Windows 95.

The Reddit user shared his #FluentDesign File Explorer concept in two images. Let’s have a look below:

After more than a month of work, I finally finished my #FluentDesign File Explorer concept! I hope you will like it! pic.twitter.com/dWV00KoUwA

As one can see, the striking feature of this reimagined Windows File Explorer is its sheer simplicity and usability that embraces the Fluent Design concept.

Alur2020 has also included Microsoft’s new Windows 10 system icon as well as the possibility to use colors as tags to organize files and folders, just like in the Finder app on macOS for better management.

Beyond the overall design, this concept imagines what tabs might look like in a modern File Explorer. It introduces the use of tabs in the File Manager allowing users to open up multiple folders in a single view, similar to Microsoft Edge browser tabs.

This Explorer concept also offers a cleaner way of working with images in folders with a minimalist ribbon of options, settings, and profile buttons on the top.

Additionally, it provides nested folders on the side panel, which allows Windows users to quickly switch between nested folders without the need to go back to the root directory multiple times.

The concept of Alur2020 has received positive responses on Reddit with over 1,500 upvotes and hundreds of comments from users praising the design as the best ever they have seen so far.

Do let us know what you think of this re-imagining of Windows File Explorer in the comments below.