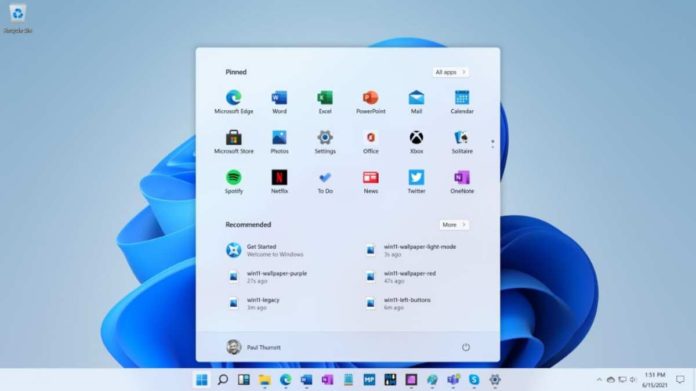 Microsoft is all set to reveal its next generation of Windows at a virtual digital event titled “What’s Next for Windows” on June 24th.

However, just days ahead of its release, a few alleged screenshots of Microsoft’s upcoming operating system were published on China’s Tieba Baidu site on Tuesday offering insight to its features.

Additionally, a Windows 11 disc image (an ISO file) has also been circulating on the web.

Tom Warren of The Verge who downloaded a copy of the “Windows 11 build 21996.1” has confirmed that the leaked ISO is genuine.

According to Tom, the upcoming OS has a new user interface, a new Start button menu, rounded corners, new animations, colorful icons, and much more.

To start off with, the setup process confirms that the next version of Windows will be called “Windows 11”. There is also a new Windows logo, Windows 11 boot animation, and a start-up sound.

this is the new Windows 11 startup sound pic.twitter.com/UQZNFBtAxa

Further, the new user interface of Windows 11 is visually appealing and reminds of the layout and design of the now-canceled Windows 10X – a lightweight OS designed for dual-screen devices like the Surface Neo.

The Taskbar is now centered featuring the new Start button and menu, default icons, and search bar. It also has a dedicated button in the taskbar to add widgets.

The new Start button menu has been simplified with no more Live Tiles and includes pinned apps, recent apps and files, and quick shut down/ restart button for Windows 11 devices. Those who do not wish to keep the app icons and Start menu centered can move them to the standard left-hand-side position by changing settings.

Further, Microsoft Windows 11 will no longer have a Search bar but instead, have a single search icon in the center among other app icons. It also has a new light and dark mode default wallpaper.

Furthermore, the new OS will have new built-in themes, an enhanced dark mode, as well as rounded corners in context menus, apps, and File Explorer. It will also feature a new slide-out “Widgets” panel to offer quick access to news, weather, stock prices, time, calendar, and other content from the Internet.

One of the new features of Windows 11 includes snap controls in the Maximize button on all apps. This feature allows the user to move apps around on either side of the screen, arrange multiple windows next to one another, and split the screen with up to four apps at once.

Additionally, the Xbox App is now integrated directly into Windows 11, which allows quick access to the Game Pass library.

While there have been reports that Microsoft is working on a brand new Windows Store, the leaked Windows 11 build reveals that the App Store is the same as the one available on Windows 10.

Although the leaked screenshots and ISO image gives an insight into Windows 11, it is important to note that this is a very early build. With still over a week before Microsoft’s June 24th Windows event is unveiled, we can expect many more leaks appearing on online forums.