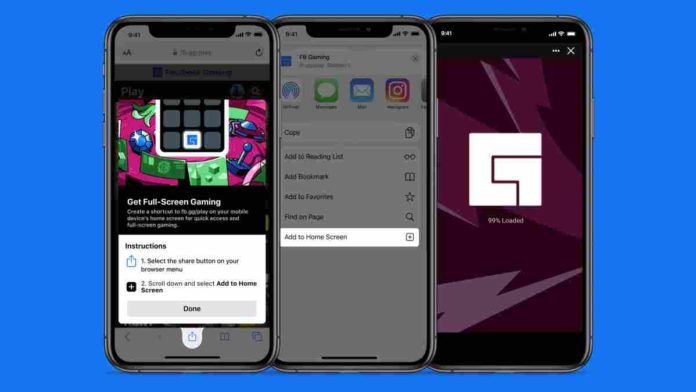 Facebook last year had launched cloud-streamed games for free within its Gaming section on its desktop website and Android app but not to iOS due to Apple’s “arbitrary” policies.

According to Apple’s tweaked guidelines, cloud-game-based apps aren’t allowed to appear on the platform unless cloud gaming operators submit each streaming game to the App Store as an individual app for review. It requires all games for a streaming service to be added to the App Store, or else it must only exist as a web app.

As a result, Facebook on Friday released a PWA (Progressive Web App) that will act as a shortcut to its gaming service on iPhone and iPad devices. This allows users to experience a number of free and free-to-play games without having to download the games onto their devices.

?Open Safari on your iOS device
? Go to https://t.co/wbEyHZ1dB1 in Safari
? Browse and play cloud games
? Save to your home screen for easy access! pic.twitter.com/zukhpcDNB8

Facebook says it’s resorting to mobile Safari on iOS devices instead of native apps due to Apple’s App Store restrictions that do not allow it to get on the Store.

The idea is similar to Google’s Stadia service and Microsoft’s Xbox Cloud Gaming platform, which makes its cloud games available on iPhone and iPad via a Safari web app.

“We’ve come to the same conclusion as others: Web apps are the only option for streaming cloud games on iOS at the moment. As many have pointed out, Apple’s policy to ‘allow’ cloud games on the App Store doesn’t allow for much at all,” said Vivek Sharma, Facebook Gaming’s Vice President.

“Apple’s requirement for each cloud game to have its own page, go through review, and appear in search listings defeats the purpose of cloud gaming. These roadblocks mean players are prevented from discovering new games, playing cross-device, and accessing high-quality games instantly in native iOS apps — even for those who aren’t using the latest and most expensive devices.”

To access the app, simply visit the Facebook Gaming home page from your iPhone or iPad. Then tap the “Add to Home Screen” to add a shortcut to the web app on your homepage.

Currently, only users who reside in the United States and parts of Canada and Mexico can access Facebook cloud gaming on their iOS devices. Other countries’ users will have to continue playing HTML 5 games, at least for now.