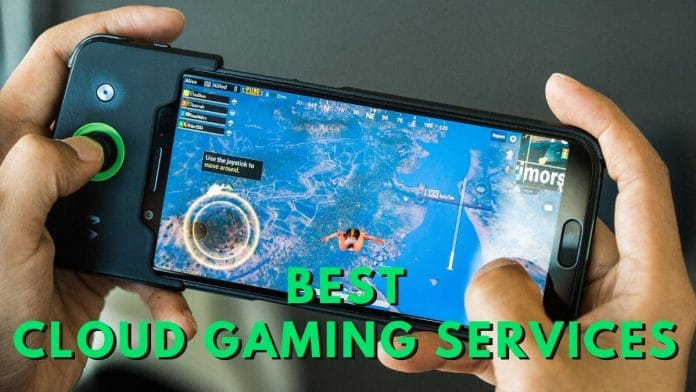 There is no denying the fact that the decades-old console and PC gaming industry will soon be taken over by cloud gaming services.

Leading gaming & technology corporations like Sony, Nvidia, Microsoft, Google, and many others have already launched their first-generation cloud gaming services.

Every mainstream cloud-based gaming service out there packs several unique features, and choosing the one that fulfills your requirements can be a difficult task.

What Is Cloud Gaming Service?

Traditionally, gaming requires upfront hardware investments in the form of a gaming console or a gaming PC. Additionally, you have to physically or digitally acquire the games that you want to play (which further increases the price of a decent gaming experience). 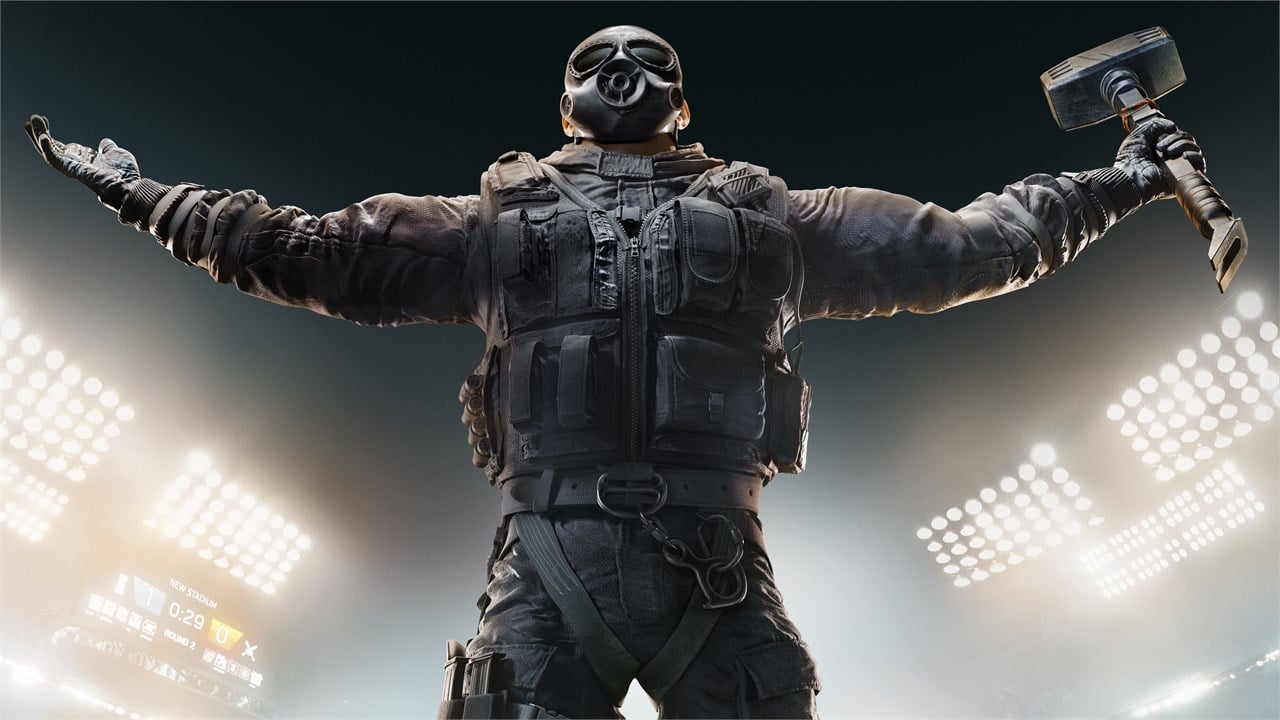 As its name suggests, cloud gaming refers to the games played online over the cloud using high-speed internet. While playing games on the cloud, the hardware configuration of your computing device hardly matters as all of the heavy lifting is done in the cloud.

Another noteworthy feature of cloud-based gaming is cross-platform games support. For instance, it makes it possible to play PC games on a macOS computer.

Similar to content streaming services like Netflix, a cloud gaming platform helps you to stream games on any laptop, desktop, smartphone, tablet, and TV.

To enjoy this gaming service, you have to pay a monthly subscription fee. Cloud gaming is also referred to as Gaming as a Service (GaaS).

With a library of over 400 high-quality AAA and indie games, GeForce Now (formerly known as NVIDIA GRID) is one of the oldest cloud-based gaming platforms. Using GeForce Now, gamers can access their existing game libraries on Steam, Uplay, Origin, and other digital stores. 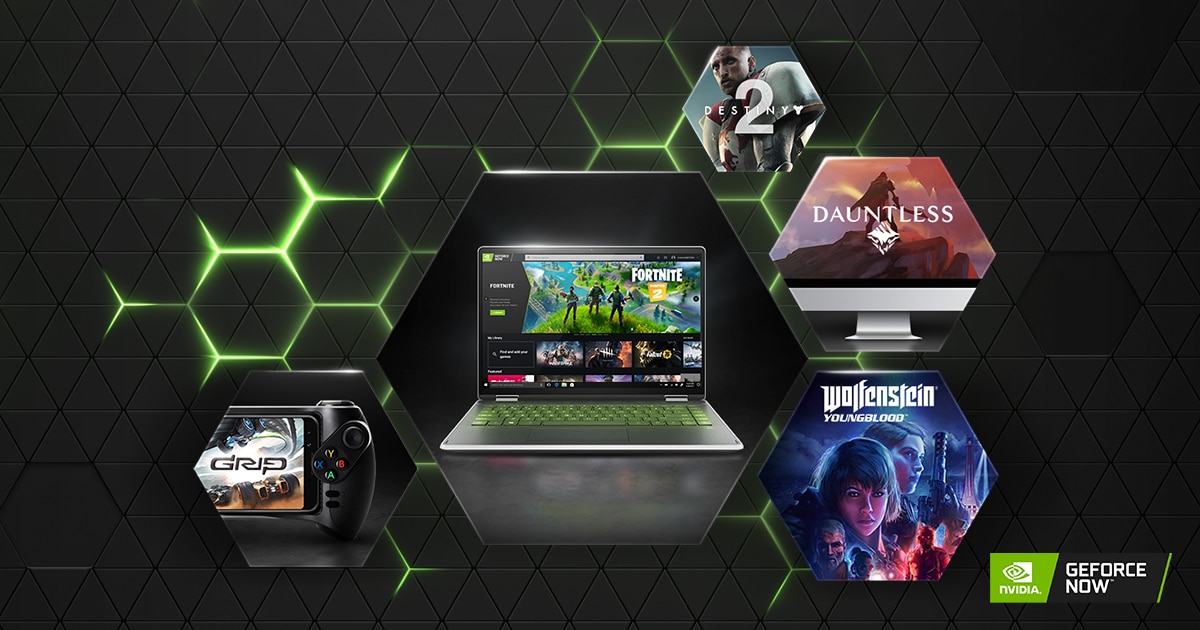 GeForce Now prioritizes graphics quality over everything. Depending on your internet speed, you can enjoy around 60FPS to 120FPS gameplay. GeForce Now hosts many impressive free cloud streaming games.

Presently, GeForce Now is exclusively available in Europe and North America. Due to its free membership GeForce Now becomes an immediate answer to, “Are there any free cloud gaming services?“

Shadow is a premium cloud computing gaming service that offers no free trials. Once subscribed, you can instantly load your games and progress for Steam, Epic, Uplay, Battle.net, and other mainstream digital delivery platforms. 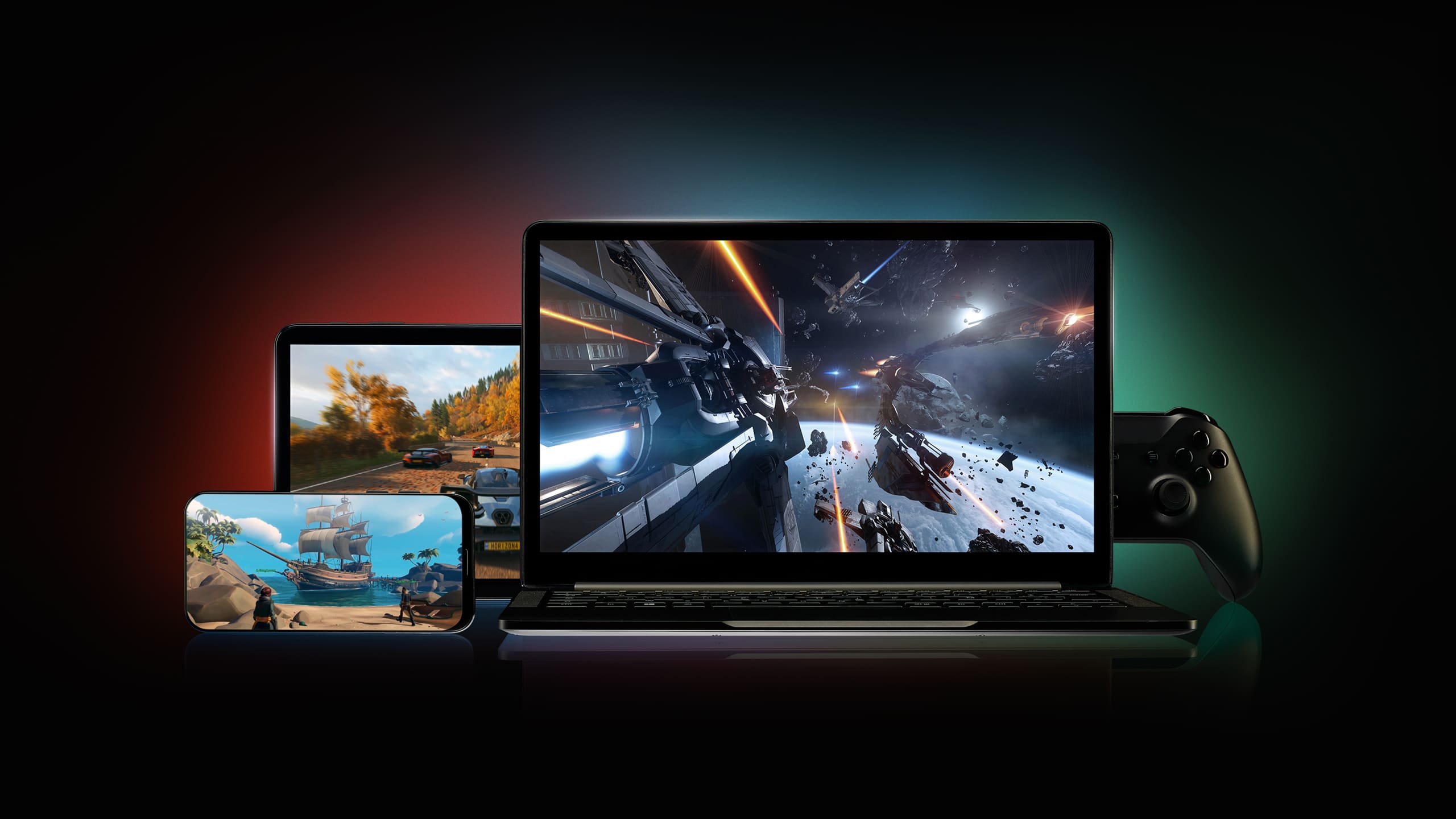 Access to high-end gaming computers on Shadow offers a performance of up to 144Hz in Full HD and 60Hz in 4K UHD. Shadow has its native application for Microsoft Windows, macOS, Android, iOS, Apple TV, and Android TV.

While writing this article, Shadow is available in certain regions of the United States. That said, it will be available nationwide by the end of this year. Apart from games, Shadow’s machinery can also be used to run certain software. A minimum internet speed of 15Mbps is required for running this service smoothly.

Depending on your usage, cloud storage ranging from 256 GB to 2 TB can be purchased from Shadow. 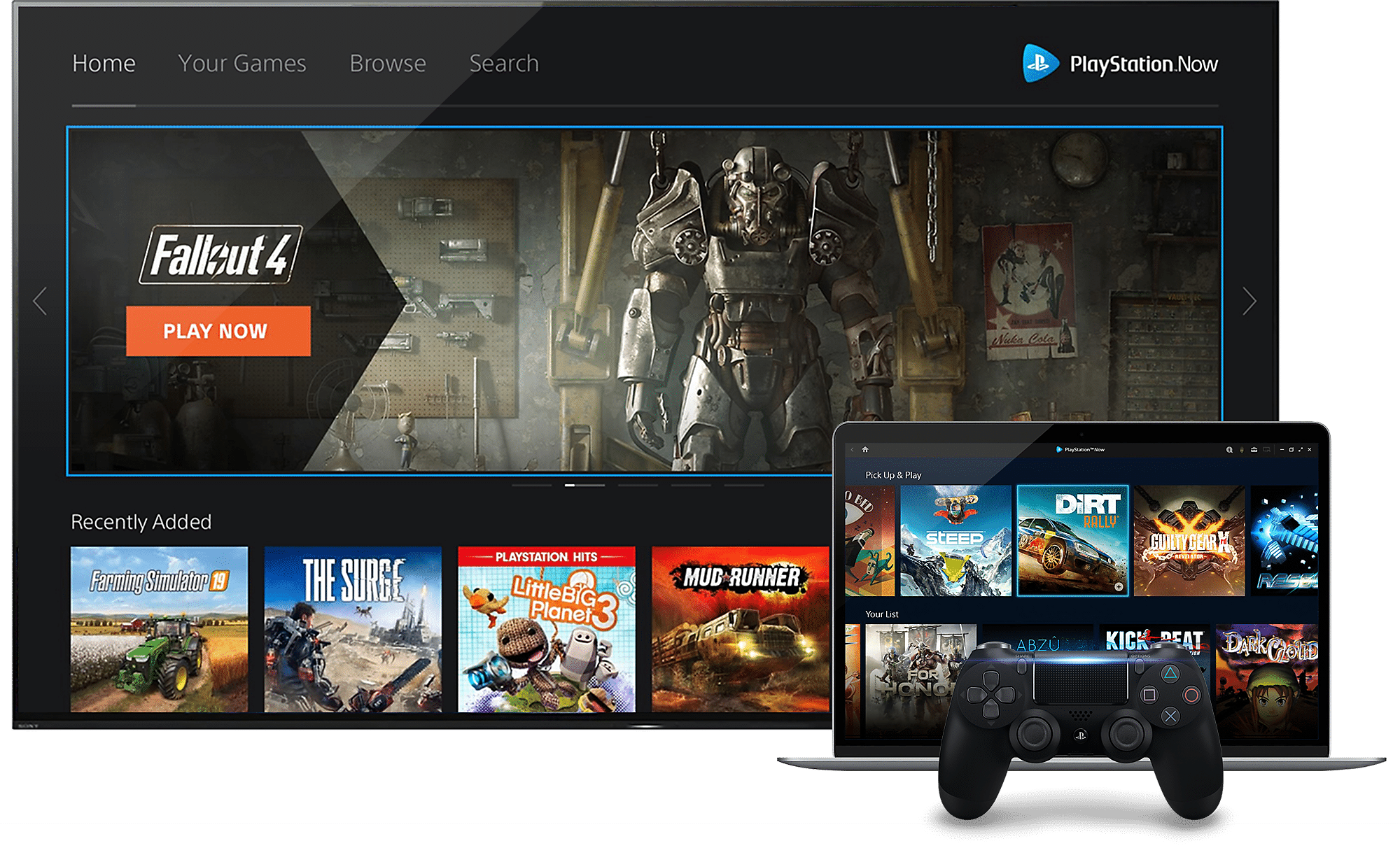 Playstation Now offers a cloud gaming free trial for 7 days. Once the trial is over, you can continue using this gaming service for a monthly subscription of $9.99. Games downloaded using Playstation Now support PS4 Pro enhancements, user-purchased add-ons, and DLC.

Presently, Playstation Now is available in 12 countries such as Austria, Belgium, Canada, France, Germany, Ireland, Japan, Luxembourg, Switzerland, The Netherlands, UK, and the USA. This cheap cloud gaming functions properly even on a low-speed internet connection and it requires a minimum of 5mbps speed for its proper functioning.

To use PlayStation Now on a Microsoft Windows PC you should have access to a Dualshock 4 controller. Lastly, PlayStation Now allows users to capture, save, and share in-game screenshots.

Vortex is an ideal cloud-streaming gaming service for playing multiplayer games like counterstrike, Fortnite Battle Royale, Doom, and No Man’s Sky. For the monthly subscription of $9.99 Vortex offers 50 hours of gaming experience coupled with 97 games. The number of hours and games increases with the pro and ultra packages.

Similar to other streaming game services on the list, Vortex can be used on Android, iOS, Microsoft Windows 10, and macOS. The onscreen controlling system can be customized as per the user’s requirements.

For its smooth functioning Vortex requires a 10Mbps internet connection and a 5Ghz Wi-Fi router. Additionally, the service can also be used on 4G/LTE.

You get a library of games on the platform to choose from. The availability of games depends on the subscription plan.

Blacknut is the only family-focused streaming service that offers cloud computers for gaming. In order to, play on-demand games you have to acquire the $12.99 per month subscription. Family-based subscription plan, dedicated kids mode, simultaneous streaming on four screens are some of the major highlights of Blacknut. 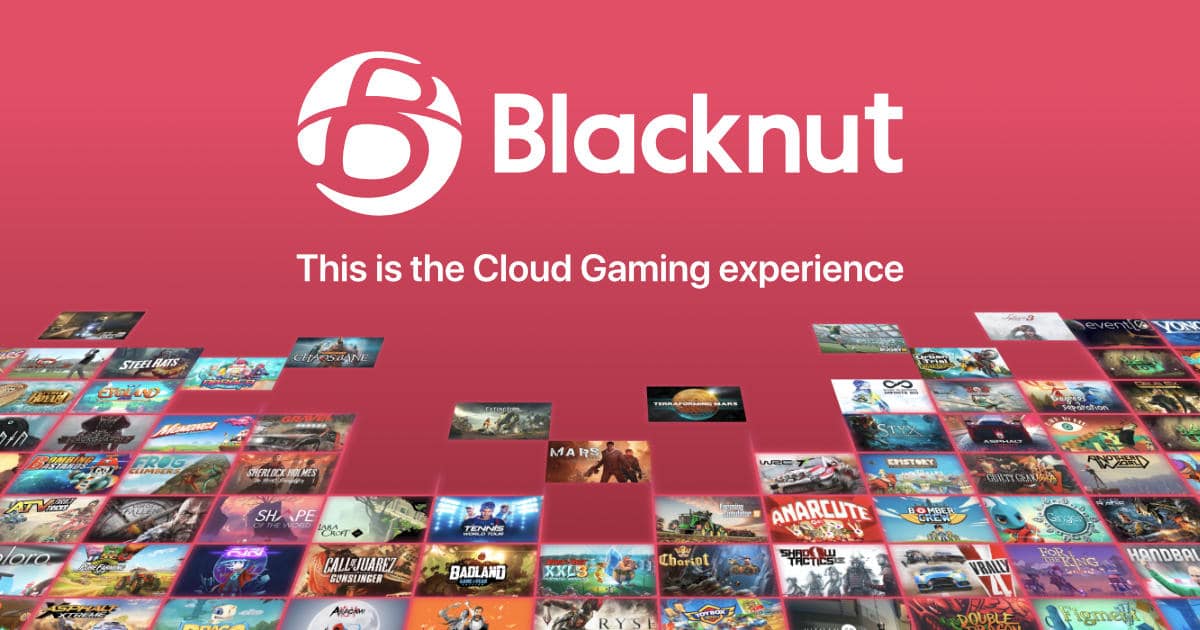 Once the kids mode is triggered, BlackNut displays the games rated E10+ and below. The two weeks long free trial period can be utilized by users interested in free cloud gaming for PC. BlackNut offers certain B grade and AA grade games to its new consumers.

Blacknut has its native application for Windows, macOS, Linux, Android, Amazon Fire TV, and selected Smart TVs. Console controllers or keyboard & mouse can be used to operate games in Blacknut.

When PlayStation jumps into a new segment, there is no way that Xbox will hold back. Presenting the Xbox Cloud gaming, which is currently in beta, has fans wanting more with its performance.

Subscribe to the first month plan for a dollar, and then regular charges apply in the subsequent month. 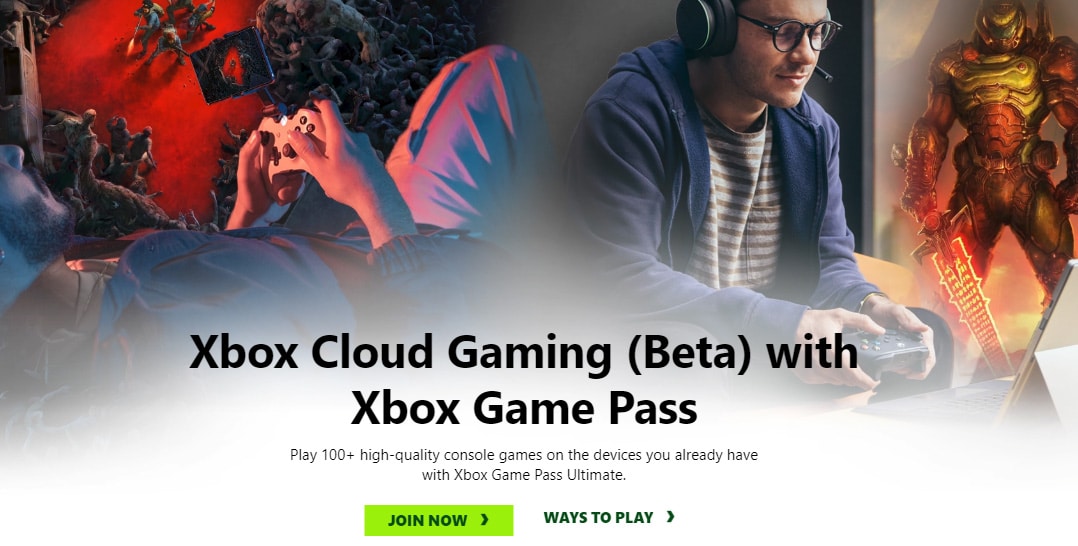 As of now, it supports over 100 gaming titles across different genres. You will need the Xbox Game Pass to play these games on the cloud gaming platform. There are multiple offers available on the pass till the launch, which you can grab before it is over.

You will need a 7-10 Mbps minimum Internet speed to get out of the gate. The more, the merrier here for higher video quality and lag-free gaming.

Parsec is a unique remote gaming service as it instructs users to manually rent a personal server for playing games and it works on the basic principals of the screen-sharing technology.

Parsec officially announced their acquisition by Unity in September, 2021. Everything old stays the same but service will expand for offering more value.

On the server front, Parsec has partnered with Amazon web series and Paperspace to make this unique approach of gaming on cloud a reality.

Parsec is also an ideal service for streamers as it allows gamers to run OBS in the background and stream their gameplay without any frame drops. Unlike the other services shared in this article, there’s a slight learning curve when it comes to Parsec. However, once you master the service you will have fruitful gaming experience.

Parsec can only be used on desktops, laptops, and Windows-powered tablets. 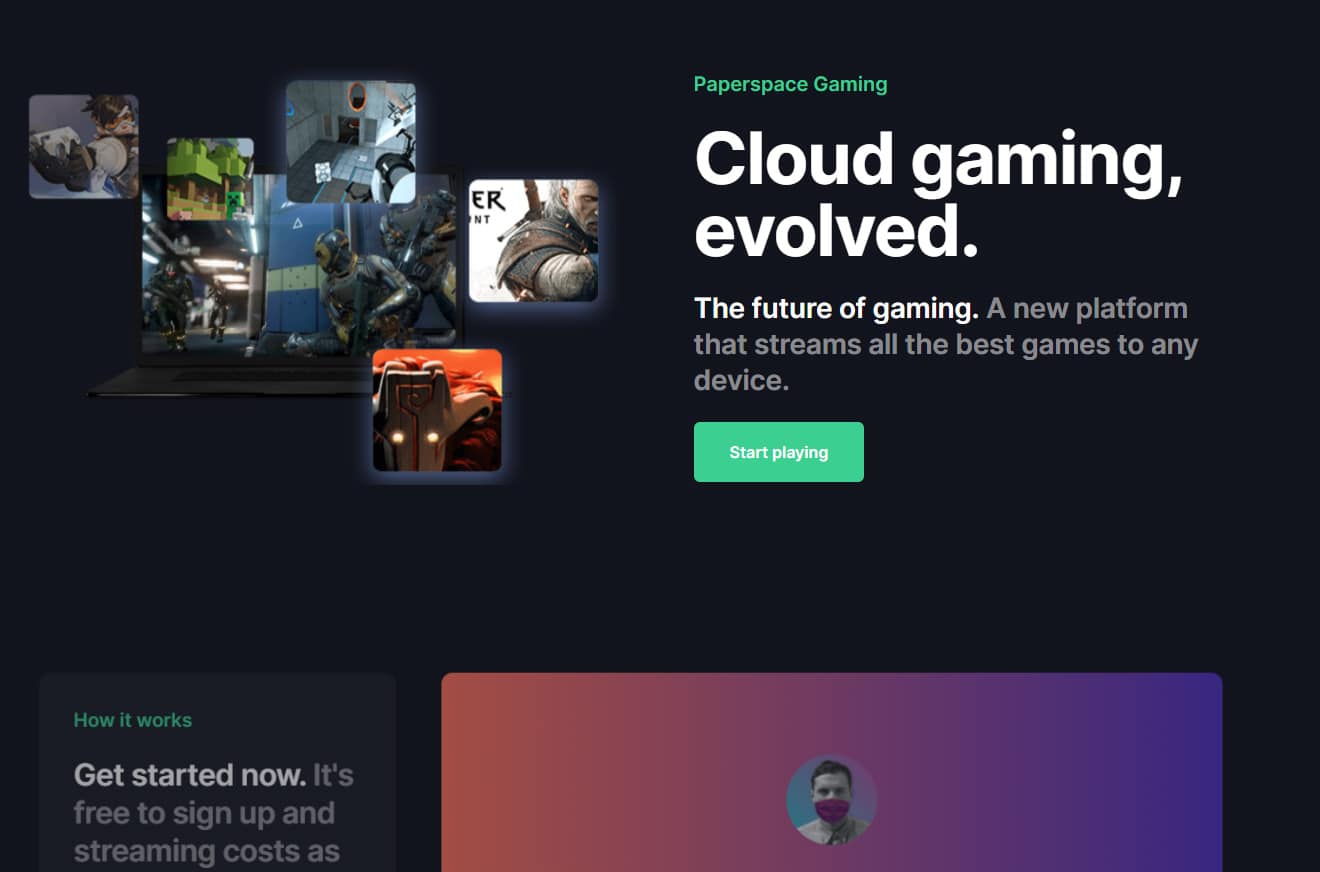 To start using Paperspace you can simply sign up with your GitHub account or Google account. Paperspace supports most modern titles and you can even enjoy Cloud Gaming Call of Duty on this platform.

The cloud gaming PC on Paperspace are upgraded on a regular basis and they undergo maintenance but the process doesn’t affect the users.

If anyone asks me what is the best gaming cloud service? I will simply answer Google Stadia. This feature-packed streaming service offers 4K game streaming at 60FPS and subscribers can acquire two free games every month.

In addition to TV, Stadia can also be used on Android smartphones and PCs. Google Chrome web browser and High-speed internet connection are the prerequisites for this cloud game service.

Amazon has dipped its hands in the cloud gaming service segment with Luna. The online gaming provider is still in its early access. It is limited to the US, Business, and teen accounts.

You can request early access and get in the queue for times when it becomes available in your region. 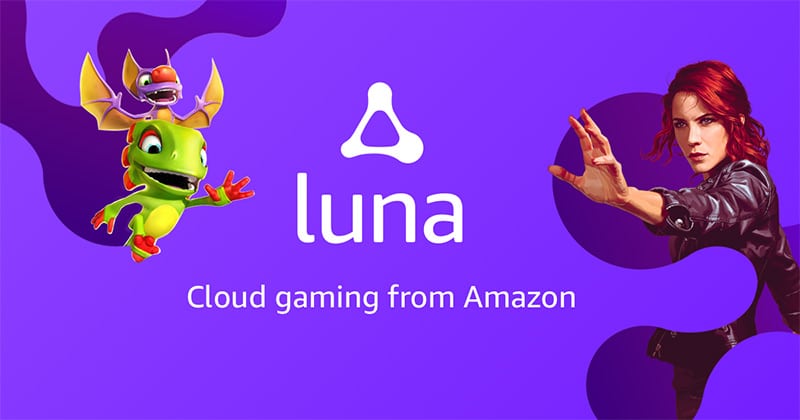 Barring Android, Luna is available for all major platforms, including iOS and Mac. You can always run in chrome, but having a dedicated app for Google’s proprietary OS would have sweetened the pot.

Several Bluetooth controllers are supported, including the Xbox Wireless Controller and Dualshock 4. You could also use the Luna controller, which feels inspired by Xbox peripheral. It also ships with a phone clip to take gaming everywhere with you.

The setup process takes a minute or less with no difficulties at all. Plugin your controller, login to the Stadia in the app or the browser, and you are good to go.

So these were some of the best cloud gaming services out these. Do share any of your favorite gaming service on the internet that offers cloud computers for gaming in the comments section below. Additionally, we will continue to update this article as more and more services start emerging.