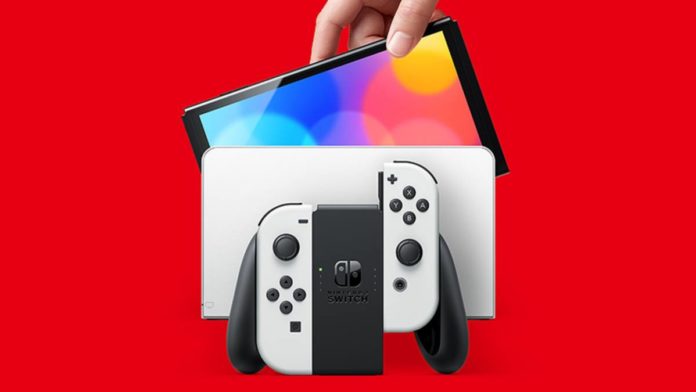 Nintendo on Tuesday announced a new Switch model featuring an OLED display panel. The gaming console will cost $349.99 and will go on sale from October 8th.

The new Nintendo Switch (OLED model) features a larger, vibrant 7-inch 720p OLED screen with vivid colors and crisp contrast. It also comes with an upgraded Nvidia chip that offers a TV output of 1080p image when connected to a TV.

Further, the new Switch features a wide, adjustable stand for easy viewing in tabletop mode, a built-in wired LAN port to connect online when playing in TV mode, 64GB of internal storage (which is expandable up to 2TB via microSDHC or microSD cards), and enhanced audio from the system’s onboard speakers for handheld and tabletop play.

Furthermore, the new Switch is powered by an NVIDIA Custom Tegra processor. It packs a 4310mAh battery, which can deliver up to 4 to 9 hours of gaming time per charge. It measures 4-inch high, 9.5-inch long, and .55-inch deep with Joy-Con attached and weighs 0.71 pounds (0.32kg).

The second is Tabletop mode, where you can flip the stand on the back of the system for a solid and sturdy foundation. It allows players to freely tilt the system and adjust the viewing angle.

Lastly, the Handheld mode will allow players to take the system wherever they go and play local or online multiplayer with friends.

“The new Nintendo Switch (OLED model) is a great option for players who want to experience the new vibrant screen when playing in handheld and tabletop mode,” said Nintendo of America President Doug Bowser.

Nintendo Switch (OLED model) will be available in two color options such as white and neon red/neon blue.