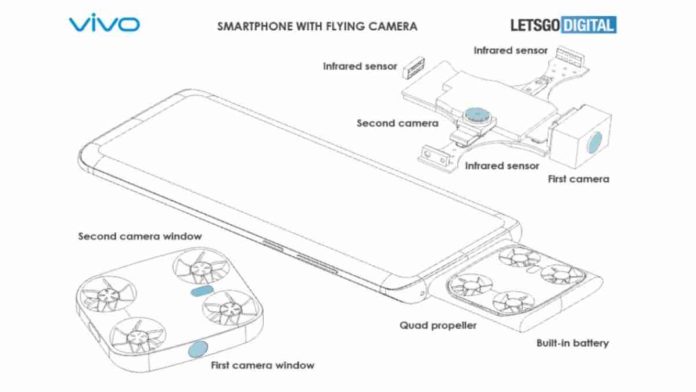 Chinese smartphone maker Vivo has reportedly patented a smartphone with a detachable camera, which will be able to fly like a drone in the air.

According to the Dutch blog LetsgoDigital, which was the first to spot the patent, reported that the patent was filed for Vivo Mobile Communication with the World Mental Property Workplace (WIPO) in December 2020.

Going by the images on the patent, the camera can be detached from the bottom of the smartphone’s body, after which it can fly like a drone to shoot photos and videos of the user.

It also has three infrared proximity sensors to prevent the camera module from crashing into other objects during flight. This could also imply that the camera will follow the user automatically when flying.

Additionally, the module has an extra battery pack that is separate from the smartphone’s battery. It also has a mounting bracket with an integrated fingerprint scanner, which can be removed completely from the smartphone along with the whole camera module.

As per the report, one camera will be located at the front and the other one will be on the top. There would also be an option to add a third and fourth camera too.

Like any other drone camera, the module will be able to change positions, which will allow it to shoot not only from different angles but also from a long distance.

The patent states that the detachable flying camera module can be controlled using the smartphone to which it is attached. It may also support air gesture support but the patent does not mention any detail regarding this in the documentation.

Since the design is only a patent, it remains to be seen if it will be converted into an actual product. Also, Vivo has not officially revealed anything about such a device.

However, it is good to know that the company is at least thinking outside the box to develop such a unique device.