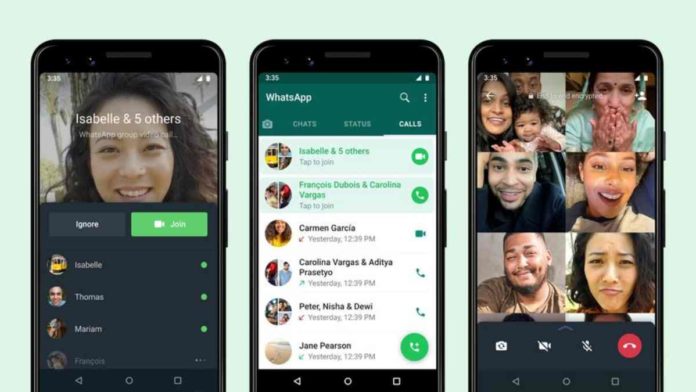 Facebook-owned company WhatsApp on Monday rolled out a new group call feature that will allow users to join a group video or voice call even after it has started.

The ‘Joinable calls’ feature will allow the users to see the calls that were missed during the ring and join the group call while it is still going on.

With the new feature, the participants can be seen on the video call screen, the way they are seen on various other communication apps.

“At a time when so many of us are apart, there’s nothing better than getting together on a group call with friends and family, and there’s nothing worse than realizing that you missed a special moment As the popularity of group calls continues to grow, we’ve been working to improve the experience for our users – while of course still providing the security and privacy of end-to-end encryption,” WhatsApp said in a statement.

“Today we’re introducing the ability to join a group call, even after it’s started. Joinable calls reduce the burden of answering a group call as it starts, and brings the spontaneity and ease of in-person conversations to a group calling on WhatsApp.”

The Joinable calls feature allows the user to drop off and re-join as long as the call is still ongoing.

“Joinable calls reduce the burden of answering a group call as it starts, and brings the spontaneity and ease of in-person conversations to group calling on WhatsApp,” the platform added.

It also brings a new call info screen with it, which allows users to see who has already joined a group call and who has been invited but hasn’t joined yet. If you hit ‘ignore’, you can join later from the calls tab in WhatsApp.

Group calling allows up to eight participants to video call with each other using WhatsApp.

Group video call history will appear in the CALLS tab. You can tap the call history to view the individual participants from the call.