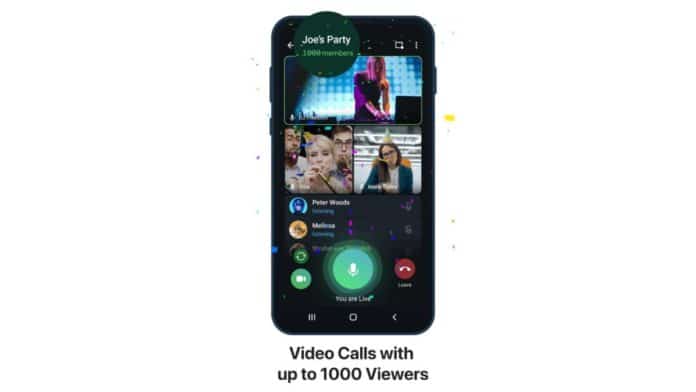 Telegram, the encrypted messaging app, on Friday announced a major update to its platform that brings new features and improvements.

The group video calling feature will now allow support of up to 1,000 people to join a group video call. While the maximum number of people able to participate and broadcast video from both their camera and screen remains capped at 30, Telegram now allows up to 1,000 viewers to join and watch anything from online lectures to live rap battles.

“Group video calls now have 1,000 viewers, record video messages in high quality and can be scaled up, allowing viewing at 0.5 or 2x the speed of regular videos. We’ve also added screen sharing with voice to all video calls, including 1-on-1 calls, and more,” the company said in a blogpost.

It also added that the company will “keep increasing this limit until all humans on Earth can join one group call and watch us yodel in celebration (coming soon).”

To start a Group Video Call, create a Voice Chat from the info page (in the ? menu on Android) of any group where you are an admin – then turn your video on.

Users will also be able to record video messages in higher resolution and tap on a video message to expand it and take in all those extra pixels.

According to the blog post, tapping on an expanded video message pauses it and gives users the opportunity to fast forward or rewind the message in case they have missed a word.

To record a video message, tap the microphone icon in the message bar to switch from voice message recording to video. Press and hold to record, then tap the camera icon to switch back.

“Audio from your device will keep playing as you record so you can now sing along to your favorite songs or reply without pausing your podcast. Additionally, recording with your rear camera lets you pinch to zoom in and capture things at a distance or add a dramatic effect (eerie music not included),” the blog post notes.

The media player in Telegram will also allow users to power through lecture videos and replay Kung Fu moves in slow motion, as the app now supports 0.5x, 1.5x, and 2x playback speeds, as well as 0.2x speed.

To change your video playback speed, tap ? on Android or ? on iOS when watching a video in fullscreen.

On Android, users can also press and hold the 2X button when playing voice or video messages to switch between 0.5x, 1x, 1.5x, and 2x playback speed.

The platform will now allow Screen Sharing while placing 1-on-1 calls, which includes the sound from the user’s device when broadcasting in any video call.

When switching on video during any call, users can swipe to choose a camera or share their screen instead — and use the Video Preview to make sure that everything is perfect before going live.

To share your screen during a video call, tap the camera button and select your screen as the video source.

Users will also be able to auto-delete messages in any chat after 1 day or 1 week and now 1 month.

Further, the media editor allows users to illustrate and decorate their photos and videos with drawings, text, and stickers, and the in-app camera now utilizes all zoom levels on a device – including 0.5x and 2x.

You can head over to Telegram’s blog to check out the complete list of changes and improvements.