In June, Microsoft officially announced Windows 11, its next major Windows operating system with new features, a redesigned user interface, a new Windows Store, improvements to performance, a new approach for the Start menu and the taskbar as well as support for Android applications.

Days after the announcement, Microsoft also released the first Windows 11 Insider Preview build for people to try out new features and share feedback to improve the operating system.

Following the release, a common concern that is being shared online on the Feedback Hub is the inability to move the Windows 11 Taskbar to other parts of the screen.

For those unaware, the taskbar is always placed on the bottom of the Windows screen by default.

In Windows 10 or earlier versions of Windows, Microsoft users can move the taskbar on the top or even on the left or right side. However, in Windows 11, Microsoft doesn’t allow users to pin the taskbar to other sides of the screen.

A suggestion posted in the Windows Feedback Hub over three months ago demanding the ability to move the taskbar to the sides or the top has now gained over 20,000 upvotes.

“Bring back the ability to move the taskbar to the top and sides of the screen of Windows 11,” read the suggestion posted over three months ago. 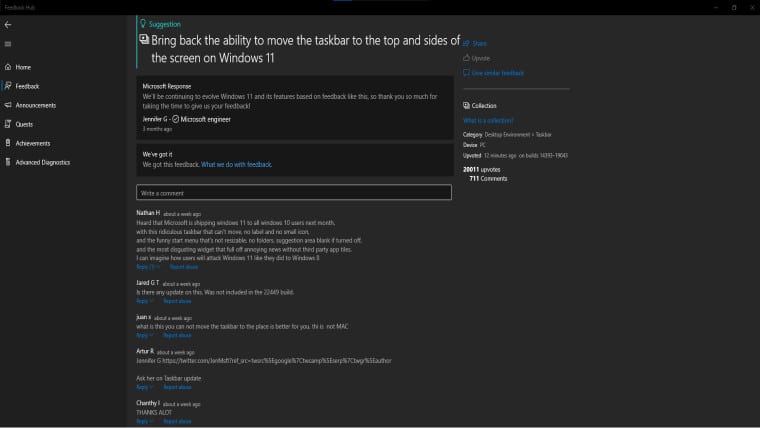 Besides this, users have even noted that they won’t be upgrading to Windows 11 unless Microsoft adds the feature as the location of the taskbar is important to their daily workflow.

While Microsoft did not provide any explanation for the removal of the feature, it only gave a general response to the thread by promising to keep an eye on the feedback it receives.

“We’ll be continuing to evolve Windows 11 and its features based on feedback like this, so thank you so much for taking the time to give us your feedback!” it said.

You can find the Feedback Hub entry here.

Microsoft is set to officially release Windows 11 on October 5th.

With less than a month to go, it is a little difficult for the company to take the feedback into consideration and make it a part of Windows 11 OS. It remains to be seen if it is added as a part of a future update.