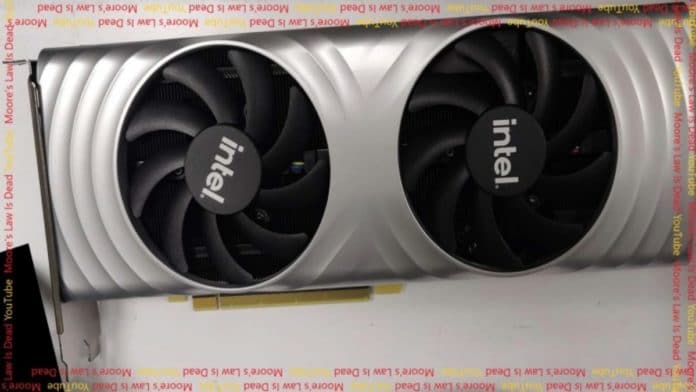 In August this year, Intel had announced the brand for its upcoming consumer high-performance graphics products: Intel Arc.

The Arc brand, which is reportedly designed to compete with Nvidia GeForce and AMD Radeon, will cover hardware, software and services. It will span multiple hardware generations, with the first generation, based on the Xe HPG microarchitecture, code-named Alchemist (formerly known as DG2).

The chip-maker had also revealed the code names of future generations under the Arc brand: Battlemage, Celestial and Druid.

Now, YouTube channel Moore’s Law is Dead (via Videocardz) has posted some leaked images of the engineering samples.

The card shown above is a higher-end DG2-512EU model, which has a new black PCB layout and a silver shroud with a pair of cooling fans, each with nine blades.

The Arc Alchemist GPU is set to debut in in desktops, add-in-cards, and notebook form factors from global partners in Q1 2022.